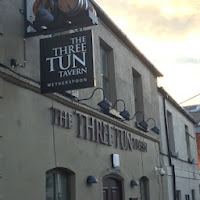 Next Tuesday, Wetherspoon’s will be opening their first pub in the Republic of Ireland, the Three Tun Tavern in Blackrock, County Dublin. They have now released the initial food and drink menus, including prices. Bear in mind that everything is priced in Euros, but even making allowance for that the prices are considerably higher than those charged on this side of the border. The current £-€ exchange rate is about 1.25, which makes the €10.95 gourmet burger equate to £8.76 – but in my local Spoons it’s only £6.99.

Apart from declaring the use of Irish ingredients (although not Irish chicken), the food menu is fairly similar to what you would see over here. On the drinks side, much of the media attention has been devoted to the fact that Spoons are not offering Guinness as they have been unable to agree an acceptable price point with Diageo.

However, a striking aspect is the strong presence of “craft keg” beers, including Dogfish Head DNA, Franciscan Well Rebel Red, Shipyard American Pale Ale and Tom Crean’s Irish Lager. It has been pointed out to me that these are all from offshoots of major breweries rather than small independents, but they are definitely craft-themed rather than mainstream in the sense of John Smith’s Extra Smooth. In the UK, the equivalent products would be on cask.

This is understandable, given the lack of a recent cask-drinking tradition in Ireland, but it is a definite shift in the balance of the beer range from what we see here. Will these beers become the preferred choice of the more adventurous Irish beer drinker?

There are also three cask beers, at the cheapest pint prices on the list (€3.75=£3.00), plus the promise of further varying guest ales from Irish brewers. If Wetherspoon’s are to make a success of cask in Ireland, maintaining quality will be absolutely crucial – something where they often fall down on this side of the Irish Sea.

It will be interesting to see how the Spoons experiment in Ireland goes. It certainly has great potential to shake up that country’s often complacent and unenterprising pub trade. My understanding is that it’s common to be expected to pay €6 for a pint, so they will be offering some stiff price competition.