The red and the grey 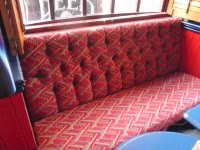 Many years ago, I attended a work-related course in Cambridge. One night, we attendees went out to see a film and afterwards adjourned to a nearby pub for a swift pint. I distinctly recall one of the company walking in and saying “this is one of those red pubs, isn’t it?” At the time, this was a very recognisable theme of pub interior design, with red dralon benches, thick carpet and subdued lighting. If the pubs of old had been “wooden wombs” this, if anything, was even more womb-like.

It wasn’t too long before it fell out of fashion and the bare-boards alehouse style became popular again. The more recent trend, though, is to ditch the unadorned wood colour scheme in favour of painting exposed surfaces in white and pale greys, blues and greens. Originally a feature of self-consciously trendy bars, this has now spread to what you would regard as ordinary mainstream pubs. Only recently I was in a nice little village pub where the front of the bar, instead of being polished wood, had been painted a matt pale grey. It was offputting and just didn’t seem to suit the place.

I can’t help thinking that this kind of colour scheme comes across as cold and harsh and a long way from the feeling of being “at home” that you hope to find in a pub. For whatever reason, there seems to be a marked aversion nowadays to making pubs feel warm, cosy, comfortable and welcoming.