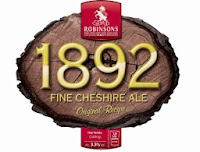 It was sad, but not entirely surprising, news that Robinson’s Brewery are planning to phase out their 1892 cask mild from the end of April next year. Going through various incarnations as Best Mild and Hatters before the current name, this was once their staple beer and must still be the biggest-selling light mild in the country. It featured in a series of classic adverts from the 1930s, often featuring a cheeky-looking mustachioed hiker. Unfortunately the graphic shown below is the only example I can find. 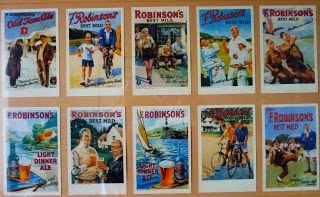 Over the years, while I’ve always been primarily a Bitter man, I’ve drunk a fair bit of it. It’s a pleasant, well-made beer, but to be honest not really one you would go out of your way to sample. But surely that is the point of mild – it is intended to be an undemanding beer that is consumed more for refreshment than intoxication, and deliberately avoids strong and potentially offputting flavours. That may explain why it has not enjoyed any kind of “ironic hipster” revitalisation. The same role in the beer market is now performed by the standard “cooking lagers” – Carling, Carlsberg and Foster’s.

Robinson’s claim that sales of 1892 have slumped by 32% during 2014, so it seems to be a product in steep decline. However, it still enjoys healthy sales in some Robinson’s pubs such as the Armoury in Edgeley, and it has to be said that its demise may have more to do with the fact that the brewery – despite a recent refitting that supposedly made it more “flexible” – has a minimum brew length of 60 barrels, which is rather too much for the current level of sales.

The other local family brewers, Holt’s, Hyde’s and Lees, all still produce cask milds at presumably even smaller volumes, so obviously don’t suffer from the same restrictions. Indeed Sam Smith’s produce both dark and light milds in keg form and appear to shift large quantities of them, helped no doubt by the bargain price. So perhaps if there remains some demand for mild in Robinson’s pubs, they could consider allowing other brewers’ milds to be sold, or even having 1892 contract-brewed by a smaller, more flexible brewery.

They also say that, when 1892 is withdrawn, they will introduce a 3.7% amber bitter as part of their core range, something that has been lacking since the demise of Old Stockport. As I generally like Robinson’s house character, I can see it being something that I will enjoy, but in many people’s eyes it is likely to become a watchword for blandness.