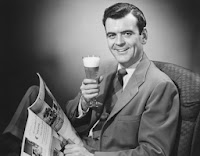 A recent study by academics from Keele University and University College London has punctured some myths about drinking amongst the middle-aged and elderly. On average, they are drinking a lot less than they did ten years ago and, contrary to popular belief, divorced women tend to cut down after splitting up rather than becoming secret dipsomaniacs.

However, there’s one significant exception. The study found that “the group most at risk of heavy drinking in later life are older single men with high levels of education and above average wealth.” I suppose that means me! Apparently the average personal wealth in the UK – including property assets – is around £147,000 and, given that I own a house that is probably worth more than that, and am a university graduate, I must fall into that category. Maybe they have more opportunity for socialising and the funds to pay for it, or perhaps they are intelligent enough to realise that the official drinking guidelines represent the bottom point on a gentle J-curve rather than a cliff of risk.

There was a rather more in-depth report in Wednesday’s Times (unfortunately hidden behind the Murdoch paywall) which quotes Professor Clare Holdsworth of Keele University as saying “We have an image of who we think problematic drinkers are, people who are lonely or down on their luck. But people who are drinking more are actually enjoying themselves.” Oh dear, that will never do, will it?

It also quotes the egregious Professor Ian Gilmore, chairman of the Alcohol Heath Alliance, as continuing to insist that efforts to reduce overall alcohol consumption would be more worthwhile than specific targeting of problem groups. But attempting to control the behaviour of the whole population has a somewhat totalitarian ring, and surely if I as a responsible adult make a free choice to accept a little bit more risk as a trade-off with a bit more pleasure, that is absolutely none of his business.

The Mail is notorious for health scaremongering, but plumbs new depths today with a story describing us as a nation awash with booze. How exactly that tallies with average alcohol consumption having fallen by a fifth this century is hard to work out, especially since the biggest fall has been amongst the younger age group who are held most responsible for the much-exaggerated “town centre mayhem”. It could even be that people are encouraged to overindulge on the rare occasions they are “off the leash” by the ever-growing censoriousness about even light alcohol consumption in daily life.