Nanny in a bunny suit 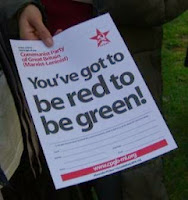 The Green Party have recently enjoyed a marked rise in the opinion polls, and this week released a policy statement, which is well summarised here. Many might see their economic policies as occupying the middle ground between utopia and insanity, but at the same time would imagine them to be quite fun, in a waccy-baccy, rough cider, dreadlock, dog-on-a-string kind of way.

But, if you read more closely, they outdo the other major parties in their desire for nannying and social control. They say “Higher taxes will be brought in on alcohol and tobacco, and a complete alcohol advertising ban imposed.” They would also seek to encourage a “transition from diets dominated by meat”. It seems that they have a real problem with any commercial organisation profiting from people enjoying themselves.

One commentator has described their ideology as “Communism designed by middle-class women”. Nobody should imagine that voting Green will lead to a kinder, gentler, more tolerant society – indeed the opposite would be far more likely. Less free and less prosperous. Although no doubt many middle-aged beardies with a love of twiggy bitter will do so all the same.