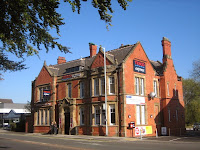 Following an accounting scandal and a dramatic downturn in trading figures, Tesco have announced the closure of 43 stores across the country and the scrapping of plans to open another 49. No doubt many who have opposed the conversion of pubs into Tesco Express stores will experience a pleasing sense of Schadenfreude.

Amongst the closures is the Tesco Express store in Heaton Chapel (pictured), which was converted from the former Chapel House pub and has only been open for about three years. I wrote about it here. To be honest, it had never been a particularly appealing pub throughout my time living in the area, going through a short-lived incarnation as a Tut’n’Shive (often disparagingly referred to as the Tub’o’Shite) and ending up as the Irish-themed and keg-only Conor’s Bar. Few tears were shed when it closed.

However, if we are to believe the narrative that greedy supermarkets and pubcos have conspired to close thriving pubs, then surely all those making this argument will be queueing up to invest in turning it back into a pub. Won’t they?

It’s also somewhat ironic how people campaign against Tesco coming to their area, but then many of the same people complain about the loss of jobs when they close a store.