English as she is spoke 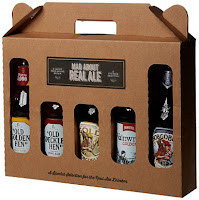 Traditionalists such as myself are often heard to complain about the changing meaning of English words, which usually seems to result in a loss of clarity and precision in the language. However, any student of linguistics has to recognise that language does evolve over time, and that dictionaries have to reflect how people actually use words, not how someone else thinks they should.

The concept of “real ale” was invented by CAMRA, and before too long they succeeded in having it defined in the Oxford English Dictionary as

Real Ale: a name for draught (or bottled) beer brewed from traditional ingredients, matured by secondary fermentation in the container from which it is dispensed, and served without the use of extraneous carbon dioxide.

However, in recent years I’ve increasingly begun to hear other people, especially work colleagues, say “I’ve got a few of those real ales in from ASDA.” Clearly, they’re referring to brewery-conditioned Premium Bottled Ales such as Pedigree and Abbot Ale, which aren’t real ales by the official definition. However, they see them as the bottle equivalent of real ales that you might get in the pub, and so there’s some sense in making the link.

My local branch of Morrisons has recently revamped its beer aisle, and there’s a prominent sign above the Premium Bottled Ales section saying “Real Ales”. Probably one or two pedants will write to them pointing out their error, but in reality that’s how customers define that beer category. In twenty years’ time, might we be seeing “real ale” redefined as any British top-fermented beer in a traditional style?

Next to “Real Ales” is “Craft Beers”, which seems to encompass a wide variety of British, American, Belgian and Swedish beers, but all in 330ml or 355ml bottles or cans, whereas the PBAs are in 500ml bottles. The definition of “craft beer” has been endlessly wrangled over in the beer blogosphere, but in the actual marketplace it seems to be resolving itself.

In the off-trade, it’s beers in smaller bottles that may be stronger and more diverse and experimental in style than the boring old brown PBAs in their big bottles. Probably more expensive too. And, in the on-trade draught beer market, “craft beer” increasingly means “craft keg”. You can argue until you’re blue in the face that, by any rational standard, virtually all microbrewed real ale is craft beer, but the market is saying otherwise.

Long gone are the days when a small, traditional, quirky, long-established, undeniably “artisanal” brewery such as Bathams or Hook Norton could be described as “craft”. Although eventually that moment of discovery is bound to happen when trendsetters say “Wow, these guys have been doing it for 150 years!”