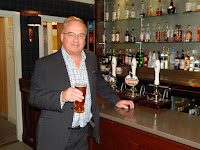 Last year, Mike Benner left his post as Chief Executive of CAMRA to move across to SIBA. Mike was (and is) a very able and articulate chap and a compelling speaker. To replace him, CAMRA appointed Tim Page, a former Army officer who had extensive experience in other not-for-profit organisations, but wasn’t a beer industry veteran. He’s a rather avuncular-looking, middle-aged chap, and many people’s expectations were that he’d be someone who would keep things ticking over without unduly rocking the boat.

However, he seems to be made of sterner stuff, and has launched a “Revitalisation Project” which aims to take a root-and-branch review of CAMRA’s strategies, structures and organisation. A few years ago, there was a “Fit for Purpose Review” following a conference motion by two Greater Manchester members, but unfortunately this ended up just looking at internal processes and did not address the wider issues.

CAMRA now has a record number of members, but is assailed by doubts as to what its purpose is in the current beer world, and concerns about the ageing profile of active members, and lack of engagement of younger ones. I’ve been a member for 34 years, and a life member for most of that time, so obviously it’s something I’m concerned about, even if at times I have been critical of some of its stances.

So here are my thoughts as to what Tim’s review should address:

There’s a huge amount of enthusiasm out there for beer and pubs, and the challenge for CAMRA is to harness that without unnecessarily alienating people. It also has to be recognised that different people will have different priorities within the overall organisation.
Posted by Curmudgeon at 3:38 pm