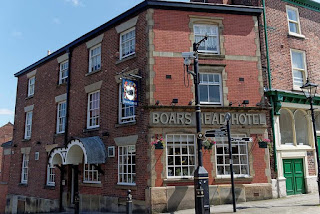 A few jaws must have dropped last Thursday night at the news that the Stockport & South Manchester Branch of CAMRA had chosen as its Pub of the Year for 2016* the Boar's Head on Stockport Market Place, a Sam Smith's tied house.

It’s rare that such an award goes to a family brewer’s pub at all, and especially to one outside the well-known local four of Holts, Hydes, Lees and Robinsons, that is well-known for its eccentric and secretive management style What’s more, it only serves one real ale, and one that very much goes against the current pale and hoppy trend.

But it serves that one beer consistently well, meriting a place in the Good Beer Guide for the past three years. Last year we had a tour of the extensive cellars and saw the row of wooden barrels of Old Brewery Bitter on the stillage. Yes, full 36-gallon barrels. How many pubs still have the turnover to justify them? There was, of course, also an extensive array of kegs – it serves eight different keg beers, plus cider. Cellar tours proved very popular during Stockport Beer Week in September.

It always seems busy, even when other nearby pubs are quiet, and is heaving on market days. Vast quantities of beer are shifted – it must be amongst the top pubs in Stockport for sheer volume of beer sold. It has been run for seven years by Terry and Sue Wild, who provide a warm welcome and also have a team of cheerful and enthusiastic staff. There’s a wide cross-section of customers, and it's the kind of place where complete strangers will start chatting to each other, the absence of TV football and piped music making this much easier.

It may be difficult to define a "proper pub", but this certainly qualifies. Plus it's cheaper than the Wetherspoons a couple of hundred yards away, with Old Brewery Bitter currently just £1.80 a pint. I wrote about a lunchtime visit last year here - I wonder if the pub cat will make an appearance on the presentation night.

It would be dull if all Pubs of the Year were of the same type, and it makes a refreshing change to see one selected on the basis of atmosphere and welcome rather than number of different beers.

I was going to do a post about how people have a kind of mental image of pubs, which increasingly varies from the reality, except in Sam’s pubs. In many areas, they’re becoming about the only places where you can enjoy a quiet drink and a chat in comfortable, cosy surroundings. So many others are now dominated by food, or TV sport, or are specialist beer outlets with a narrow clientele. This award rather makes my point for me.

* It should be pointed out that the Pub of the Year is chosen from the previous year’s twelve Pubs of the Month, and that Ye Olde Vic in Edgeley, which has been the subject of a community buyout, was a strong second.