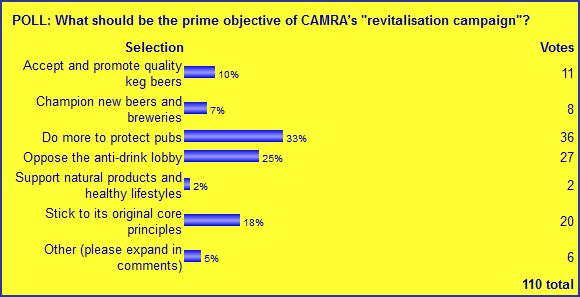 Last week, CAMRA formally launched its Revitalisation Project. The consultation document that is being sent out to all members can be downloaded here, and there’s also a short online survey that both members and non-members can complete.

This project has been sometimes viewed as a response to the rise of “craft keg”, but in reality it goes much wider than this. While CAMRA has a record number of members, it can be argued that its original objective of saving cask beer has largely been achieved. Probably a higher proportion of pubs now stock it than at any time during CAMRA’s existence. But the brewing industry and pub trade are faced with many other threats, such as high duty levels, the overall decline in pubgoing, the rise of the anti-drink lobby and the asset-stripping approach of the pubcos. Given this, it makes sense for CAMRA to do some soul-searching and seek to redefine what it is actually FOR.

So I created a poll on what CAMRA’s main priority should be. I deliberately chose to make this “one option only” to force people to say what was most important to them. The results are pretty clear-cut, with “Do more to protect pubs” in the lead, “Oppose the anti-drink lobby” a strong second. “Stick to core principles” a good third, and “Promote quality keg beers” lagging in fourth. The original poll and the comments can be seen here. It’s important to remember, though, that doing more to protect pubs will be pissing in the wind unless enough people can be encouraged to use them to keep them viable.

I’ve given my own views on how CAMRA should reposition itself here, a post that has gained a lot of agreement. To sum up, although it doesn’t trip off the tongue, “An organisation that campaigns for quality beer, consumer rights, pubgoing and the preservation of our pub heritage, with particular reference to the unique British tradition of cask-conditioning.”

I think it would be unrealistic to expect any kind of major shift in direction from this exercise, and some people are inevitably going to be disappointed. However, maybe a change in emphasis and a greater degree of inclusiveness would be desirable.

In my view the single most important thing that CAMRA should do is to drop its dogmatic refusal to recognise merit in non-real draught and bottled beers. That is absolutely not to say they should be put on the same footing as cask beer, but that it should be accepted that many are excellent products that should not be ignored or disparaged. It’s utterly ridiculous that I should be told, if drinking a bottle of Hawkshead Lakeland Gold, one of my favourite bottled beers, that “it’s a product we don’t support”. But obviously that alone isn’t going to drive many people to man the barricades.

It’s also worth repeating what Boozy Procrastinator said yesterday in this excellent blogpost:


The nature of drinking, in the home or on the town, is changing. People don’t go to the same places and are unlikely to be coaxed back into them. It is all about trend and maybe in that respect CAMRA and pubs should consider themselves to be like heavy metal.

There are off-shoots and little cliques that raise the profile once in a while but once these are spun off there is always a faithful core that remains, always open and welcoming to both the original purpose and future evolution.

It won’t ever go out of fashion because it has never been in fashion.