A distinctive feature of Sam Smith’s pubs is a variety of peremptory notices saying things such as: 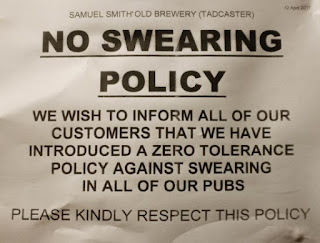 The latest commandment to be handed down on a tablet of stone from Tadcaster is a total prohibition of swearing, which has attracted a good deal of press and social media comment.

An obvious problem is how you define swearing in the first place. Is it just the well-known c-, f- and w- words, or would it extend to “Jesus Christ, what a bloody cockwomble!” And, as Richard Coldwell points out, given the distinctly down-to-earth nature of many of Sams’ pubs and their clientele, it could prove rather difficult to enforce, not to mention alienating the regular customers. He says, with a memorable turn of phrase, “trying to enforce a swearing ban in somewhere like the very busy General Eliott or The Duncan in Leeds city centre would be like trying to plait snot.” (Incidentally, credit to Richard for the picture reproduced above)

I’m old enough not to be shocked by swearing, but I have to say that the sound of other customers continually effing and blinding can lower the tone in pubs and produce a somewhat uncomfortable atmosphere, especially when combined with a generally rather coarse line of conversation. As I reported in my Opening Times column back in 2004,


IF YOU'RE a frequent pubgoer, it doesn’t do to be a shrinking violet. Robust language and forthright opinions are commonplace, but what’s acceptable at one place and time might not go down too well across the board. One Sunday lunchtime I was in what can only be described as a rather genteel pub, when a group of lads came in to have a meal. They proceeded to engage in a conversation that nobody else in the room could have failed to overhear, liberally laced with four-letter words and including detailed accounts of their sordid holiday exploits that left little to the imagination. They weren’t at all threatening, and this was nothing that would have been out of place in a city centre at ten o’clock on Friday night, but in an environment where there were pensioners just wanting a quiet drink, and families eating lunch with children, it was distinctly jarring.

Surely in a situation like this the old-fashioned landlord would have come into his own with a well-timed intervention of “come on lads, mind your language!”

This, as you might have guessed. was in the Nursery, my local pub in Heaton Norris. I can’t say I come across such egregious swearing in pubs very often, but the one place I encounter it most is maybe in Wetherspoon’s, which tend to attract a younger and more downmarket clientele than most of the other pubs I frequent. On the other hand, a no swearing policy has long applied in Ye Olde Vic in Edgeley, the community-owned free house.

So maybe this is an area, rather like certain other issues, where there’s a good case for reinstating the traditional distinction between public bar and lounge, where there’s an expectation that different standards of conduct apply. To quote Richard Coldwell again, “Industrial clothing and language should always remain strictly within the tap room, in my opinion.”