Following in the footsteps of Morse

Why don’t we have a day out in Oxford, asked someone on the Beer & Pubs Forum. It sounded right up my street, with a great selection of characterful pubs full of historical and literary associations, in a city I hadn’t visited for thirty years. The only problem was that, while entirely feasible as a day trip by train from Stockport, Oxford is 143 miles away, and the standard return fare was a rather eyewatering £78. However, trainsplit.com came to the rescue and, taking advantage of split ticketing, I was able to get the price down to a much more reasonable £42, albeit at the cost of having a wad of thirteen tickets and reservations, as shown below. 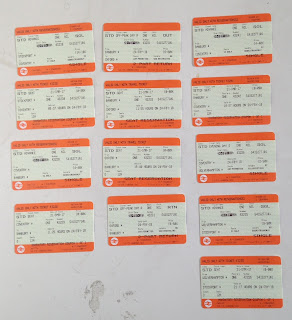 So the tickets were duly booked, and the appointed day dawned very cold but sunny. I was able to get a through train in each direction and both trains were on time, which doesn’t always happen. I didn’t make any detailed notes, but here are some brief impressions of the pubs we visited.

I then had to catch my train home, but a couple who were staying a bit later also called in at the Good Beer Guide-listed White Rabbit, which they reported as being extremely busy.

In summary, it was an excellent day out, with plenty of good beer and stimulating conversation. It was good to see familiar faces again and also meet for the first time Tim Thomas from West Berks CAMRA and local resident Tim Hampson, who is currently the Acting Editor of What’s Brewing and BEER. Martin Taylor has been doing a pub-by-pub write-up of the day on his blog, starting here.

It was noticeable how busy almost all the pubs were, and how many younger people were amongst the clientele. However, this is only to be expected in such a major student and tourist city, and it would be rash to draw any lessons for estate pubs in Oldham or Oswaldtwistle. The return train was also virtually full all the way to Manchester, which shows how much times have changed since the days when, after 8 pm, you could often virtually have a carriage to yourself.

Unfortunately, it meant I had to miss my local CAMRA branch’s Pub of the Year presentation at Sam Smith’s excellent Blue Bell in Levenshulme, but the Oxford trip had been arranged, booked and paid for well in advance, and realistically you can’t have everything.

Posted by Curmudgeon at 2:49 pm