Hotting up for craft lager 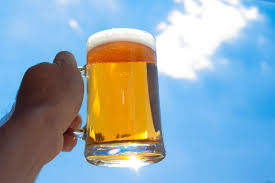 The current spell of hot weather inevitably raises a question mark over the quality of the cask beer you’re likely to encounter in the pub. If they get their cellar and line cooling right, and achieve a decent throughput, there’s no recent why a well-run pub can’t serve you up a cool, tasty refreshing pint. In the past week or so I’ve had no problem in finding decent cask. But, unfortunately, too many pubs are left exposed on one or more of these points, and you end up with tepid dishwater.

So, the dilemma arises as to whether, if you don’t feel you can trust the cask, you’d be better playing it safe and sticking to the lager instead. And that leads on to the further question of why craft brewers can’t get more of a share of the lager market, which is currently dominated by the large international brewers. Lager accounts for two-thirds of all beer sold in British pubs; cask only a sixth, so there is a huge untapped market out there that, on the face of it, is ripe for the picking.

However, things aren’t quite that simple. Lager has long since taken over from bitter as the default beer in British pubs, the one chosen by people who aren’t really that interested in beer. What is important to its drinkers is something that is accessible, consistent and refreshing, not something with strong or unusual flavours or wild variability. But that doesn’t make them stupid. As I wrote here, “For most drinkers, beer is just a commodity, and within their terms of reference they are making a rational and sensible choice by picking well-known keg and lager brands. In no way are they deluded dupes.”

That is the barrier that has to be surmounted, and it’s noticeable how, at present, where craft lagers are available, they are more often chosen by those who usually favour cask or craft ales, not the drinkers of Carling and Stella. You don’t win converts by telling people that what they’re currently drinking is rubbish. And it always seems a touch ironic listening to CAMRA members in their practical Millets trousers berating others for their lack of taste and discernment.

It’s also often thought that lager, which by its nature is inherently a somewhat subtle type of beer, sometimes verging on blandness, is therefore easy to make, whereas in reality the opposite is true. Because of its unassuming, unadorned character, there is nowhere to hide, and you can’t mask defects by chucking in loads of hops or fruit flavours. Quite a few of the British craft lagers I’ve sampled have exhibited obvious faults, and many of them seem to have a rather sweet, malty taste that is lacking in the grassy, noble hop character found in some of the finest beers in the style. Some of them are also top-fermented ales masquerading as lagers, an updated version of the “bastard lagers” of the past like Robinson’s Einhorn.

That’s not to say that British craft lagers can’t be excellent, of course. There has been a lot of praise, for example, for Lost & Grounded’s Keller Pils, and I recently had a very good pint of their own-brew Craft Lager in Brewhouse & Kitchen. But, to gain wider acceptance, they have to progress beyond just being one of a row of rotating craft kegs on the back wall, where they will inevitably be overshadowed by beers with louder, showier flavours. They need to become permanent fixtures on bars, so they attract regular, loyal customers, to be consistent, and not to be so distinctive that people will find them offputting. Of course quality is important, but you also have to get your distribution and image right.

Clearly it’s unlikely that craft lagers are going to gain the mass following of Fosters and Kronenbourg, and if they did they would probably be disowned by the craft movement anyway. But there is a huge potential market out there if you can produce something that offers a little bit more in terms of flavour and character, and is perceived as being a cooler choice while not marking the drinker out as being a bit weird. And it has already been done in the form of Camden Hells, which I’m told is now a very common sight in more upmarket pubs and bars in London. Yes, it is now owned by AB InBev, but the foundations of its success were laid when Camden was an independent company. That’s the model that aspiring craft lager brewers should be trying to follow.