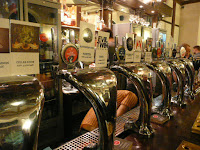 Over the weekend, there was an article in the Sunday Telegraph entitled Craft beer bubble bursts with glut of new brands. It reported:


“There is still growth, but the market is now much tougher for new entrants,” says Jonny Forsyth, global drinks analyst at market research group Mintel.

“The number of brands is outstripping the growth and now people with money are wising up to the market.

“If someone asked me to invest in a craft beer company now, I’d say ‘no way, that ship has long sailed.’”...

...This view is shared by Mr Forsyth, who says that the quality of new craft beer is often not of a high standard.

“We see a lot of brands starting from scratch, and a lot of these people are not expert brewers,” he said.

“The best brewers tend to work for the bigger companies.

“The quality can leave a bit to desire and although they can charge a lot of money, it doesn’t mean it’s made by experts.”

While the reports of its death may be somewhat exaggerated, there is undoubtedly a widespread feeling that the market has become saturated and we are at or approaching a crest of the wave moment.

The article also falls into the familiar problem of definition. It states that craft only accounts for 5% of the British beer market, but surely a large proportion of the 14% of on-trade beer sales that are cask also fall into the craft category, unless you’re arguing that they are two mutually exclusive concepts.

And, as the Morning Advertiser reported last year, most of the big brands within that category are actually owned by international brewers, and so wouldn’t count as craft by the US definition.