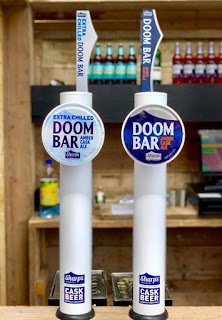 In the early days of CAMRA, a substantial proportion of cask beer, especially in the Midlands and North of England, was served via electric pumps of various kinds. However, there was a problem with this that it could be well-nigh impossible to identify what was real and what was not. So, progressively, with a certain amount of encouragement from CAMRA, breweries replaced them with handpumps, which gave an unmistakeable sign that the beer was real. I wouldn’t want to suggest that increasing profits by, in many cases, exchanging metered dispense and oversize glasses with brim-measures ever entered into their heads. There were a scattering of cases of keg beer being dispensed via handpumps, but those now seem to have pretty much entirely disappeared. If you see a handpump, you know that the beer will be real.

However, this can cut both ways. It can also be a clear sign of something you wish to avoid, and for many drinkers it may be once bitten, twice shy with anything coming out of a handpump. Anoher problem is that handpumps may be perceived as dull and old-fashioned in comparison to the brightly-illuminated keg taps that adorn many bar tops, not to mention harder to see. As I wrote last year:


Maybe it is also time to question whether handpumps can be more of a hindrance than a help...

...However, what allows you to clearly identify something also allows people to instantly reject it as something not for them. In many pubs, there’s a binary division between stuff on T-bar taps (including craft kegs) and stuff on handpumps, and many drinkers just won’t consider the beers on handpumps. So, just a thought, but might it be an idea to try dispensing cask beer though the T-bar taps (obviously with the word “cask” on the label) so it is not immediately marked out as something “other”. There’s no technical reason why it can’t be done as, in the past, many cask beers were sold using freeflow electric dispense.

This was really only a speculative thought experiment, but Nathaniel Southwood reports that Sharp’s brewery have tried just such a thing in an experiment at the Royal Cornwall show, as pictured above. It’s in conjunction with an attempt to introduce a chilled version of Doom Bar, but it also offers the normal-temperature version alongside it. It does state clearly on the font that it is cask beer.

Sorry we’re late to the party! Thanks @NateDawg27 this is indeed cask beer (the photo is from the Royal Cornwall Show where we’re asking people at the bar what they think). As well as at a few events, we’re trialling both the keg-style fonts and the extra chilled variant in.. 1/3
— Sharp's Brewery (@SharpsBrewery) June 9, 2019

I’m not saying that it will work, and there’s always the possibility that drinkers are so wedded to the concept of handpumps that it will deter more than it attracts. But it must be worth a try, to see whether it helps to make cask look more like everything else on the bar rather than something “other” that is to be avoided at all costs. It might eliminate some of the variability caused by incompetent bar staff having little idea how to use handpumps. Plus I would certainly be interested to see how the head and condition turn out in the absence of a swan neck and tight sparkler. However, it’s definitely not going to cover up faults in beer that has been allowed to become flat and stale. And it would probably be too much to ask for them to get some oversize glasses and attach meters to these new pumps.
Posted by Curmudgeon at 1:39 pm