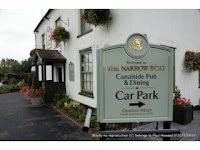 Last month, I wrote about how it was becoming ever harder to find pubs whose decor and general offer hadn’t fairly recently been put under a corporate microscope. One result of this process is that, over the years, pubs have become much more differentiated in terms of the type of clientele they’re aiming to attract.

Of course, going back forty years, there were plenty of different types of pub – rough boozers and genteel middle-class haunts, those with youth appeal and those frequented by the older generation, those that did a healthy food trade and those that made a speciality of live music. And, given the typical lack of external cues, it could be all too easy to end up in the “wrong” type of pub and feed distinctly out of place.

However, they also had much more in common. The vast majority were owned by breweries and offered that firm’s standard beer range regardless of their customer base. They tended to have names like the Dog & Duck and the Northumberland Arms. Hardly any brand-new pubs had been opened since the war apart from those on new housing estates, or replacements for pubs lost to the Luftwaffe or to redevelopment schemes. There was much more commonality of interior design, with most pubs still having public and saloon or lounge bars with a distinction in furnishings. Nobody had ever heard of posing tables, and the only televised football was Match of the Day and the FA Cup Final.

Since then, though, whenever brewers and pub owners had money to spend on their estates, they started to look much more closely at exactly what kind of customer they wanted to attract. One of the first manifestations of this in the 1980s was the youth-oriented fun pub, which has now pretty much died the death but for a time was all the rage. By definition, the older person wanting a comfortable seat and a quiet pint felt excluded.

There have been a variety of other trends pulling the pub trade in different directions. The rise of satellite TV sport, especially football, has led to many pubs where that is the core of their appeal. In contrast, others have concentrated on ever more ambitious food to the extent where dining becomes their prime or even sole purpose. The growth of innovation in beer has resulted in more and more pubs and bars that deliberately set out to appeal to beer enthusiasts who may often pass many others to visit them. And the relaxation of the restrictions on opening new licensed premises has allowed venues to spring up that make no pretence to a generalist appeal, many of which entirely lack the “body language” you associate with a pub.

The result is that we now have different types of pub with very little overlap in clientele. There is the lively, sports-oriented boozer, the upmarket gastropub, its more plebeian family dining cousin and the specialist craft beer bar. When people are planning a pub visit, there are many more places that they won’t even consider. I’m always struck by how, in the Stockport suburb of Heaton Chapel, the Heaton Hops, a small modern craft bar, stands directly opposite the George & Dragon, a big Edwardian boozer majoring on TV sport and cheap and cheerful eating. I wonder how many customers ever go out unsure as to which one they plan to visit. It was once the case that, in many smaller towns and suburbs, having a wander round the local pubs was a popular Friday or Saturday night activity. That’s much less common now, and even if people do it many of the pubs will be ruled out because they don’t fit the bill.

Pubs with a broader appeal across different categories of customer do survive, but they tend to be the smaller and less high-profile ones, and nobody is opening new ones. The one category that is missing from the selection being developed is those specifically catering for the traditional core purpose of pubs, simply meeting and socialising over a few drinks. There is, of course, one pub operator for whom that is their USP, but at present they rather seem to be contracting rather than expanding.

It could be argued that Wetherspoon’s fill that niche, and they certainly attract a much wider range of customers than many of the other pub categories. But they are also themselves a very carefully targeted proposition that is deliberately pitched to be nothing like traditional pubs, and whose design militates against cosy conviviality.

One benefit of this segmentation is that it reduces the chance of inadvertently wandering into the “wrong” type of pub, but it doesn’t entirely eliminate it, and many independently-run dining pubs don’t obviously advertise that fact. It’s still entirely possible to end up in a pub and think “Oops, I’m the only one in here not eating!”

Pubs are often viewed through rose-tinted spectacles as hubs of the community where all classes and types of customer happily mingle together. That was always a somewhat optimistic view, and the ever- greater fragmentation of the trade further undermines social cohesion. How can a pub be the heart of its community when its business formula deliberately excludes whole sections of people?

Posted by Curmudgeon at 3:27 pm