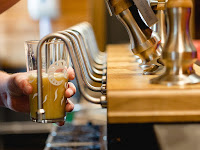 With the prospect of three long, dreary months still ahead of us before pubs in England (allegedly) return to anything like the normality we knew before lockdown, I have to say inspiration for blogging has rather dried up, unless it was to metamorphose into a general blog about Covid policy, which really isn’t my intention.

However, with a limited measure of reopening now in sight, the thoughts of some brewers and commentators have begun to turn to what role cask beer will play in the post-Covid environment. A particularly provocative take came from Ben Nunn aka Ben Viveur who, at the end of last year, asked Will it be COVID that finally kills off cask beer? A similar question was posed here by Beer Drive-Thru. I think the conclusion is very much that it is a classic “question to which the answer is no”, but it is certainly true that, in that brief window of opening last summer, cask ranges were very much trimmed to meet lower demand, and the chances of the beer ticker finding something rare or unusual on cask were greatly diminished. I didn’t notice any pubs dropping it entirely, though.

With the minuscule amount of business currently available from off-licences and pubs doing cask deliveries, some breweries seem to be falling over themselves to grab a share of that market and keep their name in the public eye, with reports of suicidal discounting which surely isn’t sustainable. The cask market has for some years been characterised by oversupply and fierce competition, and it’s hardly surprising that we have seen a revival of calls for the premiumisation of the category. However, as I have repeatedly argued, such as here, this is putting the cart before the horse and isn’t remotely realistic. It may be possible to secure a certain amount of price premium for specific brands or outlets, but for the sector as a whole it simply isn’t going to happen.

Some brewers of cask have cast envious eyes towards the superior margins enjoyed by “craft keg” beers. However, it doesn’t automatically follow that those returns would be available to them simply by switching their beers to keg. At present, craft keg only occupies a relatively small niche of low-volume brews, typically either of high strength or unusual flavour. It doesn’t go head-to-head with more normal quaffing beers, and there’s only a small grey area where brewers have a realistic option either to go for cask or keg.

Drinkers now tend to be loyal to cask as a category rather than to specific brands. At the time of the birth of CAMRA, many people might have seen themselves as a “Tetley Bitter drinker” and be prepared to drink it either in cask or keg form. Now, however, if a pub switched Taylor’s Landlord from cask to keg, pretty much all the people who previously drank it would either move to another cask beer or take their custom elsewhere. Few people see the two as directly competing alternatives, and the only pub operators I can think of who offer one or the other in their estates are Felinfoel and Sam Smith’s.

Nowadays, the pubs that don’t offer cask tend to fall into the categories of places that are effectively restaurants, down-at-heel boozers that only appeal to a local clientele, high-end trendy bars and some beer-focused places that think not selling cask puts across a modern image. Any pub seeking a wide appeal rather than just a captive market of locals will offer cask in some form. There is a huge amount of loyalty to the category that isn’t going to disappear any day soon. The day Wetherspoon's start dropping cask from some of their pubs in England and Wales is the day you really need to start worrying about its future. It’s not just changing a brand on the bar, it’s making a statement about what kind of pub you aim to be.

In fact, the continued health of cask is indicated by the fact that, contrary to many expectations, the number of breweries in the UK, far from falling, continued to increase during lockdown. However, it has to be questioned how many of those are really seeking to derive a full-time income from brewing, and how many are effectively “hobby brewers”. As Mike Hampshire says in this blogpost:

An interesting twist on the number of new breweries opening is that some are being run part-time, where owners and some employees have personal income from elsewhere. It’s a different kind of challenge for the full-time owners who will feel more personal financial pressure as well as the trading difficulties… My fear is, that although we have 3,000 breweries now, we will see many closures in the coming 12 months.

As I’ve argued in the past, the presence of a large number of players who have no imperative to make a proper financial return from their businesses continues to be a major problem for cask and prevents the market operating in a normal manner. Plumbers and carpet-fitters don’t have to contend with people doing it on the proceeds of a retirement lump sum or trust fund, but small-scale brewers do. It has often been suggested that a shake-out of brewery numbers, while painful for some individuals, might bring sanity back to the market. It was thought that lockdown might bring that about, but in fact the opposite seems to have been the case.
Posted by Curmudgeon on March 21, 2021