Death of the Premium Bottled Ale? 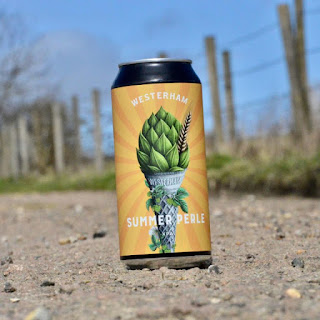 Westerham Brewery have recently announced that they are progressively switching all their packaged beer from bottles to cans. They say that “The future is bright, the future is refreshing beer in cans” and that “that the days of the ‘Premium Bottled Ale’ are dead.” However, from what I can see it appears very much alive and kicking, occupying a substantial section of the supermarket beer aisle and seeing a steady trickle of new product launches.

Their statement that the sector has been “de-premiumised” also misses the point about how it came about in the first place. In the 1980s, the vast majority of off-trade packaged beer was in cans, typically brands such as Stones, Tetley’s and Younger’s Tartan. Premium Bottled Ales were launched to distinguish the product from that category and gve drinkers something they would more readily associate with the beers they found in the pub. And, initially at least, it mostly encompassed what were considered “premium”, i.e., stronger beers such as Abbot Ale and Directors rather than ordinary bitters. There remains a strong overlap between the drinkers of premium bottled ales, and the drinkers of cask in the pub, and indeed the PBAs are often colloquially referred to as “real ales” even though the CAMRA purists would insist that they aren’t.

There is price pressure within the sector, as there is in every other competitive market, but that is nothing new. It is certainly true that brewers need to produce something that can be sold in a 4 for £6 offer, but quite a number of the smaller new-generation brewers are quite happy to sell what to my mind are very good beers through this channel. The same is true of Timothy Taylor’s with the bottled version of Landlord, the one widely-distributed cask ale that really can command a price premium. And the 7.3% McEwan’s Champion also happily exists there, so higher strength alone is no barrier.

They are, of course, correct to say that cans are more environmentally friendly, being lighter, more compact and more easily recyclable than bottles. They are also significantly cheaper. But there is a lingering belief that bottled beer is superior to that in cans, which goes back to days when cans were associated with Skol and Tartan, not to mention Long Life, “the beer specially brewed for the can”. Some of the more popular premium bottled ales such as Abbot Ale and Pedigree are also sold in cans, but they always come in four-packs and there really is no move to introduce individual cans into the sector (which also opens up the minefield of selling beers at price points that appeal to problem drinkers). I also haven’t noticed any increase in the shelf space given over to cans rather than bottles and, if anything, the growth area seems to be in multipack boxes of bottles along the lines of “Classic Golden Ales”. 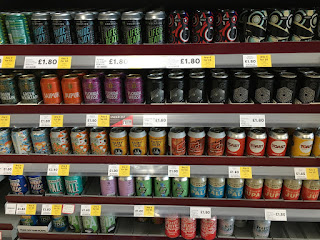 On the other hand, over the past few years the switch in the craft sector from bottles to cans has been very marked, and cans now dominate the craft section of the beer aisle. Part of the motivation for this has to been to create a point of difference from the premium bottled ales. This was why, a few years back, many craft brewers switched from 500ml to 330ml bottles. Thornbridge were perhaps the most prominent to do this, but more recently their star seems very much to have faded. It often seems that the British craft beer movement seems to define itself by doing things differently from the established family brewers rather than the industry giants. And note that those 330ml craft cans in the photo are also in a 4 for £6 offer.

But, in switching from bottles to cans, Westerham are not just changing the method of packaging, they are changing how they want their beer to be perceived. And, if they define themselves as “craft”, there will be an expectation that they will in some way be modern and innovative. If they, or other brewers, are putting beers in traditional British styles into cans they may find few takers.

Another problem with cans is that they are opaque, so that if beers are “can-conditioned” it is impossible to determine when they have settled clear or to pour them so that none of the sediment goes into the glass, whereas that isn’t difficult with a bottle-conditioned beer. I know that “murky beer is good” has become a high-status opinion nowadays, but the vast majority of drinkers still want their beer to be clear, so that is an obvious limiting factor.

In fact, Westerham’s true motivation in going for cans is probably that they believe that, by shifting to a different market sector, they will be able to gain a higher margin. This is similar to brewers contemplating a shift from cask to craft keg, as I discussed recently in considering the threat of Covid to cask. However, the higher margins are only obtainable because the beers are in a more specialist and niche sector which, over time, is vulnerable to attack. I wonder how long it will be before we see the first single cans of “premium canned ale” appear, and drinkers might start to wonder whether it’s worth paying twice as much for something with a fancy graphic of a spaceman.