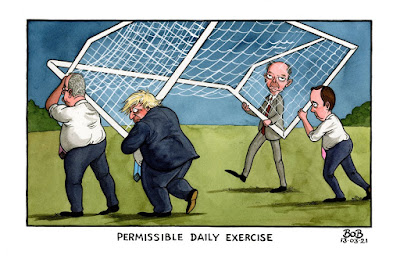 Back in February, I criticised the glacial pace of the Prime Minister’s roadmap for unlocking the country. Six weeks on, and pubs still can’t open even outdoors. However, I also said “If we are able to enjoy the second half of the year to the full, then we may look back on the preceding fifteen months as just a bad dream. A successful and prosperous reopening of the economy will erase a lot of bad memories.”

The promise was made that, subject to review, all the remaining Covid restrictions on hospitality would be removed from 21 June. I was truly looking forward to that first proper pub crawl of Stockport in the week of my birthday. And, if the restrictions on rail travel were removed too, there would be a lot of time to be made up in terms of pub days out. However, while I said I wasn’t making specific predictions, I did add the caveat that I wouldn’t count any chickens until they were hatched. In another post, I said:

There must then be a serious risk that the government would leave pubs in Tier 1 for a prolonged period. They could claim that the pubs had reopened, while ignoring the fact that they were still operating under such severe restrictions that both their ability to trade profitably and their appeal to customers had been seriously undermined. Tier 1 would be, for many pubs, a kind of living death.

I was criticised by several people for adopting an unnecessarily gloomy tone, although I could have pointed out that, so far in the pandemic, Cassandra had beaten Pollyanna about 10-2. And, when I threw down the gauntlet and offered a £10 each-way bet to a favourite charity to anyone who believed all the restrictions would go, not surprisingly, there were no takers.

Last week, the almost inevitable backsliding began, with the news that the collection of customer contact details for track and trace would continue at least until September. What is more, the requirement would change so that every customer was required to provide their details rather than just one person from each party. This is despite the revelation that, last year, the information collected was hardly used, so it was all a pretty pointless exercise. And, given that Covid is an easily transmissible disease that, in most cases, isn’t particularly serious, it isn’t even an effective method of infection control.

In itself, this is a relatively minor imposition and, as you were allowed to sign in manually rather than using the NHS app, it was in practice easy to spoof, so participation was in effect voluntary. However, on the margins it could be a deterrent to going to the pub – “Shall we have a quick one in the White Bear? Nah, can’t be arsed having to sign in again.” Plus some overzealous operators were insisting on use of the NHS app, thus excluding a large swathe of potential customers.

From the pub’s point of view, it imposes a significant administrative burden of collecting and keeping the manual records. Getting details from a large party arriving at a busy time probably needs dedicated door staff and could create a queue, not to mention a potential flashpoint. It’s easy to assume that most people will be using the NHS app, but this poll from a Cheltenham licensee suggests that is far from the case. And many tech-savvy people may choose not to use the app because they don’t want to have to suffer two weeks’ house arrest because a friend of someone who was in Spoons at the same time as them has had a false positive Covid test.

My own little bit of market research so answers appreciated...
Do you have NHS COVID-19 app on your phone?

Given this, it’s easy to understand how many in the trade feel that the government are breaking their promises and moving the goalposts. What guarantee is there that they won’t let go on the other restrictions either? And it’s important to remember that these restrictions, especially as they affect capacity, make most pubs apart from those dedicated to dining unviable in the longer term. Many pubs would have been counting on a strong late summer and autumn to restore their finances. If this isn’t allowed to happen, a lot more are likely to go to the wall.

Then it was reported that “Johnson's 'roadmap' for lifting almost all restrictions by June 21 could now be dependent on a functioning vaccine passport programme,” which would have come as a bitter blow to the trade. This would in effect simply be replacing one regime of onerous restrictions with another, and again requiring pubs themselves to act as the enforcers.

I discussed this issue in depth last week. Fortunately, following an unprecedented level of opposition from across the political spectrum, it was announced late last night that the plans would be dropped for pubs and restaurants, and confined to large public gatherings. This was greeted with widespread relief, but on reflection it comes across as a classic bait-and-switch tactic, proposing a measure that goes well beyond what you actually want to achieve, and then being praised when you eventually announce something less extreme. Indeed, I said in my post “I suspect in reality this is something that won’t happen, as even if ministers wanted to press ahead with it, it would be derailed by the practical difficulties.” In an attempt to placate opposition, Johnson has stated that any passport scheme would only last for a maximum of one year. But where have we heard that kind of promise before?

I’ve not entirely abandoned hope of that Stockport pub crawl in my birthday week. But I’ve decided to temporarily change the blog title, and I won’t be changing it back until the day comes when I can again walk freely into a pub without being challenged or being required to provide any personal details, and order a pint at the bar. And I worry I will have a very long wait, although hopefully not until next summer.

Incidentally, the bet is still open if you think that, setting aside track and trace, the remaining restrictions of masks, table service, capacity limits and a ban on perpendicular drinking will go on 21 June. I’m not expecting my inbox to be overflowing, though.