It does pick up on two common themes, that craft brewing can be an opportunity to make a fortune from a big brewery buyout, and that it reflects a kind of midlife crisis neediness. I have to say I found it mildly amusing rather than laugh-out-loud funny, and it did come across as trying a bit too hard.

However, it certainly seems to have raised some defensive hackles within the craft beer community. It’s all been done before, it’s a bit reactionary and gammon-y, and surely craft beer is such a fragile fledgling sector that it doesn’t deserve such ridicule. But this kind of prickly reaction suggests that it has touched a nerve.

Surely satire should be punching up, not punching down, the argument goes. Up to a point, yes – it has always played an important part in challenging the powerful and entitled. But it isn’t exclusively political and, over the years, satire has also had a role in turning the spotlight on the currently fashionable, the humourless, snobbish, self-righteous and self-important, all of which are tendencies that can be detected to a greater or lesser extent within the sphere of craft beer. Maybe the key factor distinguishing satire from simply poking fun is that satire is identifying a moral failing in its targets.

Much criticism of craft brewers revolves around them supposedly being just in it for the money and not practising what they preach. The same charge is often levelled at climate campaigners. But, in both cases, surely the sense of unshakeable moral certainty is equally worthy of satire. Within craft beer there are strong elements of wanting to change the world and stick it to the man, and self-congratulatory mantras such as “beer people are good people” which are frankly inviting ridicule. If it was just a case of a bunch of geeks who liked weird beers but kept themselves to themselves nobody would be bothered. You can’t really satirise bellringers or metal detectorists. 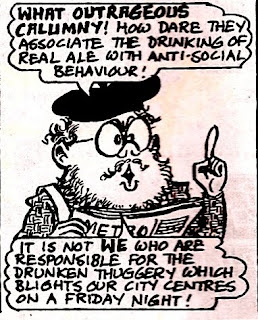 A parallel could be drawn with the Real Ale Twats comic strip that has appeared for many years in Viz comic. However, this is more in the nature of an affectionate lampoon than biting satire, and obviously arises from fairly detailed knowledge of the community it refers to. It generally ends with the titular Twats getting their comeuppance from their misreading of the situation. While the strip only appeared in the present century, it often seemed to reflect the world of twenty years earlier. I can’t remember anyone in CAMRA getting particularly upset about it, and indeed many will recognise aspects of themselves or their friends. But somehow I can’t imagine The Craft Beer Wankers making an appearance any day soon.

On his Seeing the Lizards blog, Matthew Lawrenson used to come up with little satirical takes of fictional characters’ reaction to various items of beer-related news. While these were not to my mind malicious, they could be somewhat cutting, as he had a keen eye for people’s foibles and idiosyncracies. I never recall any outrage from the real life equivalents of Greg Steakbake or Mudgie Mudgington, but some of his craft parodies seemed to get a little too close to home and generate some kickback, leading to him discontinuing that aspect of the blog, although he did revive it to look at various characters’ reaction to last year’s lockdown. And Matthew himself is partial to the odd drop of craft beer.

But I think it’s fair to say that, if anyone takes exception to finding themselves the butt of satire, they probably deserve it.