Don’t you know there’s a pandemic on? 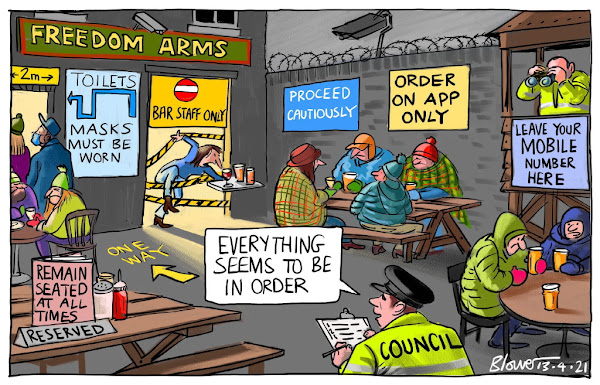 Today at last sees the reopening of pubs in England for outdoor drinking, although the weather isn’t ideally suited to it. Obviously, this is a sign of hope, but unfortunately it seems that jobsworths in several local authorities seem to be getting in first and doing their best to put a spanner in the works. First out of the blocks was one of my local councils, Cheshire East, who decided that the “Rule of 6” and the two-household rule would not apply, and that social distancing would need to be enforced within groups, not just between them.

Fortunately government minister Paul Scully stepped in and told them that this interpretation is incorrect. However, he is yet to do the same with several authorities, including Rochdale and Ribble Valley, who have decided all customers in pub outdoor areas will have to wear masks except when seated, something that most definitely is not required by law.

It has been reported that some local authorities have set up enforcement teams to patrol pub gardens to ensure that the regulations are being adhered to. It is hard to believe that, given the squeeze on council spending, this is a good use of scarce resources.

There have also been a number of cases across the country of local authorities deciding that outdoor areas that they have been happy to accept as smoking areas for years do not qualify as “Covid-safe”, even though the rules applying to both are exactly the same. Here is an example from Brighton:

6pm yesterday Brighton Council decided that with or without the temporary roof, my garden is not covid compliant and forced me to close.

Reason: garden is below street level, surrounded by 4 walls, so air cannot flow.

I can think of several outside smoking areas that effectively are surrounded by walls on all sides – the key determinant is whether they have a roof. Maybe on a very strict interpretation of the law some of these areas don’t qualify, but surely councils should be doing their best to encourage local businesses to reopen rather than putting obstacles in their way.

Then there have been a number of headlines that all customers in pub gardens would need to check in using the NHS track and trace app. This is absolutely not the case, and indeed the legislation specifically states that venues must offer an alternative means of providing details. Sometimes, this was corrected in the body of the article, but even so fit is putting across misleading information and spreading a climate of fear and doubt.

I wish every success to pubs who are able to open up outdoor drinking areas, but it seems that some in local government and the media do not share that feeling.

Edit 13/04/21: I have added the Telegraph cartoon at the head of the post, published in today's paper.