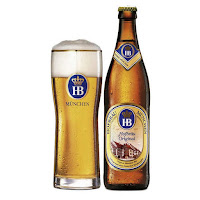 Regular readers will be aware that I have a fondness for authentic German lagers. So I was pleased last September to see Paulaner Münchner Hell appear on the shelves of my local Tesco, priced at £2 for a 500ml bottle. Initially it was not included in any multibuy offers, which some customers might have found a deterrent, but it was later brought within the scope for their regular 3 for £5 offer on premium bottled lagers and ciders. £1.67 a bottle is a very good price, and it seems to sell pretty well.

I was interested to see last weekend that Morrisons had started stocking the similar Hofbräu Original, albeit at the steeper price of £2.50 and not included in any multibuys. I suspect many Morrisons customers will find that price distinctly steep, so it remains to be seen how much they will actually sell, although I and many others would not jib at paying it for German imports in independent off licences such as the Bottle Stop in Bramhall.

Personally, although both are good, I prefer the Hofbräu to the Paulaner, but a Twitter poll I ran last year found Paulaner to be the favourite amongst the six well-known Munich breweries. This was perhaps a slightly surprising result, as most of the smart money had been riding on Augustiner.

POLL: Which is your favourite amongst the six well-known Munich breweries? 🇩🇪🍺 ** GRAND FINAL*

This raises the interesting question as to where supermarkets should place these beers on their shelves. I’ve discussed before how the beer aisle is divided into distinct sections such as premium bottled ales, mainstream canned lagers and craft beer, and many customers will only look at one or two areas and disregard the rest. Tesco have chosen to place the Paulaner alongside the 660ml bottles of Stella and San Miguel, and include it in the same offer, which makes logical sense according to its style.

Morrisons, on the other hand, have placed the Hofbräu together with the “world beers” such as Duvel and Sierra Nevada, where its relatively high price might not stand out so much. Possibly those browsing that section might appreciate its quality more, but on the other hand it could end up being overlooked if it is the only beer there in that general style.

It’s puzzling that German beers, despite their undoubted quality and their central role in the development of lager, never seem to have got the recognition in this country that they deserve. Our four biggest-selling lagers purport to have Canadian, Australian, Danish and Belgian origins, and the most fashionable one is Italian.

And it would be nice to see Jever Pilsener, which is very different from the Munich beers, appear in the mainstream supermarkets!