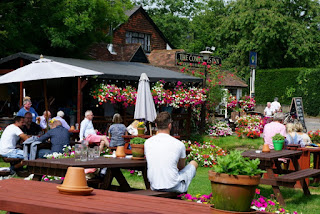 Over the recent Bank Holiday weekend, I was able to enjoy sitting outside pubs in the pleasant late Summer sunshine for two days in a row. Then, last week in Wolverhampton, the licensee of the Combermere Arms expressed surprise that I preferred to sit inside on a hot sunny day. It occurred to me that the past few decades have seen a marked movement of the business of pubs from indoors to outdoors. Of course the smoking ban was a major catalyst for this, but it had started long before that.

There was a time when outdoor drinking was largely associated with rural pubs. A trip out there on a sunny time would give the opportunity to enjoy sitting outside in a leafy beer garden. But it was a rarity in an urban environment. Those seas of underused car park surrounding estate pubs were noticeably devoid of benches for drinkers. It just wasn’t seen as important. I remember the news that one street-corner local was converting its cobbled yard into a “beer garden” being met with derision.

However, in the 1990s that began to change, motivated by a desire to present pubs as welcoming to fit, sports-oriented younger people rather than just being the preserve of grey-faced codgers in gloomy vaults. People also wanted to recreate memories of al fresco drinking on Mediterranean holidays.Benches started to appear on yards and in the margins of car parks, and gardens were brought into public use.

But then the whole situation was turned upside down by the smoking ban, which placed a huge premium on pubs being able to provide some kind of outside area to accommodate smokers. If they couldn’t cater for them at all, they would be severely disadvantaged. Smokers were looking for somewhere they could sit with their pint rather than just nipping out for a quick fag, and their non-smoking friends often wanted to be there with them.

So we saw a concerted programme of improving existing outdoor areas, making back yards open to the public and building new decking and shelters. Very often, given reasonably clement weather, pretty much the entire business of the pub moved outside, with customers just popping into the deserted interior to buy drinks. This is something that particularly struck me at the Barrels in Hereford in 2011. It seems now that virtually every pub that has the space now has a few tables outside at the front, protected by a little barrier of advertising banners.

With all this enhancement of outdoor areas, it’s hardly surprising that antismoker felt that they weren’t getting a fair crack of the whip, so pressure began to designate part of them specifically as non-smoking. Many pubs with sufficient space have taken this up, and the result is often that the best parts of the outdoor area have become non-smoking, with smokers confined to a dingy yard at the back, even though for three-quarters of the year they will be the only ones outside anyway.

Then, this year, there has been a further boost to outdoor drinking from the Covid regulations. In England, for five weeks in the Spring, pubs were only allowed to serve either food or drink outside, which obviously conferred a huge advantage on those with enough space to make it viable. In Scotland, for a short period, eating was allowed indoors, but not drinking. Even after customers were allowed back inside, capacity restrictions still led to many having to stay outside, and some felt they were safer there anyway.

Planning restrictions were eased to allow pubs to put out tables on pavements and in roads, and some of these may end up being permanent. Although in general we have a cool, damp climate that isn’t ideally suited to outdoor drinking, there does seem to be a psychological attachment to the idea of Mediterranean café culture. Despite the weather, we are the biggest purchasers of convertible cars in Europe.

Sometimes there seems to be an element of bravado about it, as with the people who go to football matches in the middle of winter wearing just a team shirt. I get the impression that it is often the louder and more boisterous customers who choose to colonise the seating just outside the door, meaning that anyone wanting to venture inside has to run a bit of gauntlet.

Some may argue that it reflects the influence of climate change, but personally I don’t really feel that our summers have become appreciably drier or warmer. Many will remember the very hot summers of 1976 and 1990, whereas this summer has been, subjectively, generally cool and wet.

An increase in outdoor drinking can cause problems for pubs’ neighbours, leading to pressure to put a curfew on allowing drinkers outside. It’s all very well saying that you shouldn’t buy a house next to a pub and then complain about the noise, but if what used to be private yard has now been turned into a beer patio that is packed with noisy drinkers into the late evening, it’s quite understandable.

Despite this, outdoor drinking is certainly here to stay, and there are regular reports such as this one I spotted recenlty of pubs seeking permission to expand their outdoor areas. The move outdoors is a major change that has happened to pub culture during my drinking career.