A touch of grey

On our recent day out in Stockport, someone commented that they weren’t too enamoured of the recent grey makeover applied to the Swan With Two Necks, and I couldn’t disagree. To my eye it looked much better in the previous more clearly defined black and white. 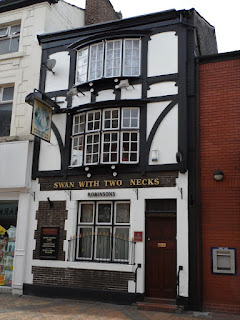 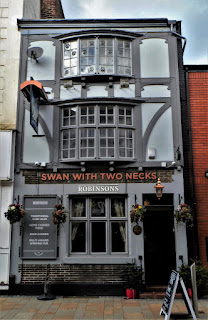 Something similar has happened to the Armoury which we visited later on in the day, where two shades of cream have been replaced by two shades of grey. 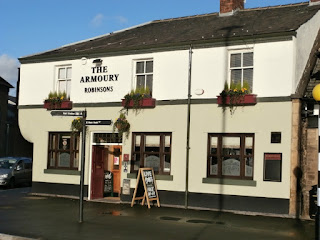 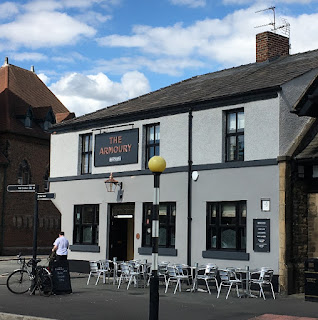 And these aren’t just two isolated examples – up and down the country, the past few years have seen an ever-growing number of pubs cast off their old guise to adopt a new grey uniform. It’s a very definite trend. Boak and Bailey wrote about Why are all the pubs going grey? earlier this year. As they say:

Our assumption is that this is about trying to attract a newer, more aspirational crowd – or, at least, not to put them off. This preference for would-be classy neutralness mirrors recent trends in home décor sometimes referred to disparagingly as ‘the grey plague’.

But if this is the case why has it been applied to the unapologetically downmarket Jolly Crofter just a couple of hundred yards away from the Armoury, where nobody of a vaguely aspirational bent would ever cross the threshold? 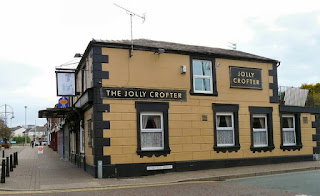 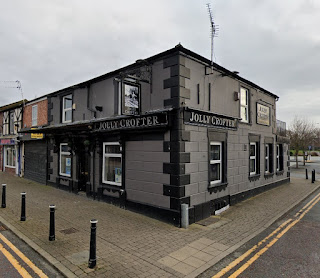 I would be genuinely interested to hear someone explain the thinking behind this, because to my mind deliberately painting pubs in a cold, drab shade only serves to make them less appealing. A few years ago, there was a fashion to remove whitewash and return pubs to their natural brickwork, which can be seen, for example, at the Old Blue Bell in Preston. But if pubs are to be plastered, then surely they are much more welcoming if it is done in white or cream, or in the pinks and pale blues that are often seen in the West Country and East Anglia.

There are numerous fads that seem to spread across pubs over the years where it is hard to understand the rationale. Examples include posing tables, scatter cushions, getting rid of beermats, dispensing with zeros in menu prices, and replacing carpet with bare wood flooring. A while back, although it seems to have passed now, there was a vogue for installing shelves of dusty old books that nobody would ever read. And nobody can ever satisfactorily explain why. People can sometimes come up with post-facto rationalisations, such as claiming that doing away with beermats makes tables easier to clean, but that isn’t the real reason.

As pubs are owned by a whole host of businesses of varying sizes, these trends cannot be blamed on a single controlling mind, and instead seem to spread organically in the same way that fashions in clothing do. We now look back aghast that people ever wore such things as platform soles. But are there certain influencers of taste in the pub world from which the wider population refreshing the decor of their pubs take their cue?

Of course, it’s only a coat of paint on the exterior, and it can easily be removed in the next refurbishment. On its own, it makes no difference to the customer inside the pub. But this trend has extended to interiors too, and in fact predated its application to external walls. To my mind at least, if a pub is decorated and furnished in cold pastels rather than warm browns, creams and reds it does detract from the experience. But it seems that the current fashion is for pubs to be edgy rather than cosy.