A long road back 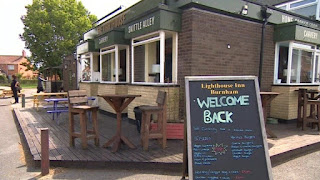 Last week, it was widely reported that 2021 had seen a 40% decline in sales of cask beer compared with the last pre-lockdown year of 2019, which naturally set many alarm bells ringing. However, this figure needs to be taken with a considerable pinch of salt. It covers the period from April to July, during most of which pubs either couldn’t open at all, could only serve outdoors, or were operating under severe restrictions that affected both their capacity and their appeal to customers. It was only in the last two weeks of July that relatively normality was allowed to return.

The 40% figure is therefore likely to be a considerable exaggeration, but there are many signs that the cask market is struggling. Licensees are reporting a noticeable shift from ale to lager, and my local Robinson’s brewery are now only supplying cask in 9-gallon firkins. There have been a number of reports of pubs, especially in London, dropping cask entirely.

Since the unlocking in mid-July I have visited around 50 different pubs. Obviously I can’t claim that my experiences are representative of the whole but, while there has been the expected variation in quality, I can’t say I’ve had any pints that were obviously well past their best and had to be returned to be bar. Nor have I come across any pubs where I expected to see cask on the bar but there wasn’t any, and I haven’t heard of any local examples where it has been dropped entirely. I wonder whether the pubs in question are ones where there was previously just a lone handpump of vinegary Doom Bar at the end of the bar, as opposed to those with a significant cask offer.

One thing that has happened is a reduction in cask ranges but, given some reduction in demand, this is a sensible case of cutting your coat according to your cloth, and in some pubs is probably long overdue. The overall conclusion seems to be that, while there are grounds for concern about the prospects for cask, it certainly isn’t time to be reading its last rites, and in some pubs it has made a strong comeback.

Of course the fortunes of cask are closely tied in with the general health of the pub trade. Again, judging from my experience, while trade seems somewhat subdued, it’s not dramatically out of line with what it was before. Some licensees have said that things are now pretty much back to normal, and I have come across one or two extremely busy pubs, particularly those with a strong Sunday lunch trade. One thing that has been widely reported is that trade is much less predictable than pre-lockdown, with unexpected rushes being offset by dead sessions.

The fact that many workers have still to return to the office has an impact on pubs in city centres although, as Tandleman reports in relation to the Lower Turk’s Head in Manchester, the city-centre weekend leisure trade in some places seems to be thriving, with several reports of peaks coming earlier in the day.

Heavy-handed Covid safety protocols largely seem to have gone by the board, although a few Perspex screens at bars and pointless one-way systems remain. I have walked out of one pub where it was clear that the full works of safety theatre were being applied, and declined to go in another because of a sign outside saying the same, but those were isolated examples. In general, rural and semi-rural pubs seem keener to retain restrictions than urban ones, maybe because they feel they have a captive market who can’t take their trade elsewhere so easily. Pubs may feel they are doing this to reassure their customers, but they should recognise that it doesn’t help the trade overall as it perpetuates the feeling of not knowing what you’re walking into on a casual visit. If you want normality to return, you have to embrace it.

I haven’t been anywhere that refused cash or insisted on app ordering, although I did go to one restaurant when on holiday that was card-only. Something that has persisted in a number of pubs is asking customers to move away from the bar after being served. While I accept that some people like standing at the bar, if not managed properly it can lead to others being blocked and so from my perspective in many pubs it is a welcome development.

It is clear that there is a long road back for both pubs and cask beer to return to what might be regarded as pre-lockdown normality, but there are some grounds for optimism in both the level of trade and customers feeling at ease in pubs. However, the last thing the trade needs is for restrictions to be reimposed over the winter, which would deal many pubs a grievous blow.

This coming Friday, I will be meeting up with a few fellow pub connoisseurs for a visit to central Stockport, and it will be interesting to see how things have come on just short of three months after unlocking.