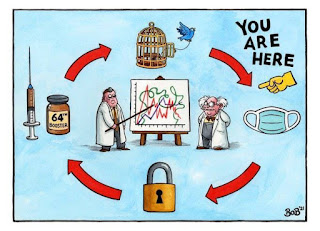 It was dismaying, although perhaps hardly surprising, when Boris Johnson announced last Saturday teatime that some Covid restrictions would be reimposed to deal with the supposed threat from the Omicron variant. Chief amongst these were the tightening of self-isolation rules and the return of mandatory mask wearing in shops and on public transport.

While hospitality was not directly affected (for now) there was a pretty immediate impact in terms of cancelled bookings. It must be remembered that organised parties over the Festive season represent a major part of the annual revenue for many pubs and restaurants. The BBC reports here one restaurant owner saying:

We had 20 cancellations over the weekend, mostly for Christmas parties. Customers were phoning to tell us they weren't sure what was going to happen in a few weeks so they'd rather cancel now.

Most of these businesses desperately needed a good December.

The knock on effect will be catastrophic.

Businesses, jobs, supply chain. A blow to a devastating year.

Just had a party of 120 cancel for next Thursday. Absolutely gutted! Completely agree wjth @EssexPR , if you are able, go and support your local-they need it. You will miss them when they aren’t there!! Happy Christmas 🎄🎅🏼🎉

While people may grudgingly put up with wearing masks when going to the supermarket, for many they are a major deterrent to discretionary leisure activities such as shopping and travel. A fall in retail footfall in town and city centres in the run-up to Christmas will affect the pubs and restaurants located there. Amazon will once more be laughing all the way to the bank. As stated in this article on the general economic impact of the curbs:

We can also expect railway leisure travel, the only part of rail travel that’s nearly back to pre-pandemic levels, to suffer. Who wants to take a day trip to York or the seaside if it involves wearing a mask for hours on end? And the knock-on effects could be significant: train passengers spend an average of £95 per trip on things like shops, restaurants, hotels and galleries, totalling £133 billion a year.

I’ve made a number of leisure trips by train since the restrictions were lifted in July, but I certainly won’t be making any more until they are removed again. And I’m still some way of recouping the cost of my three-year Senior Railcard.

There is also a wider effect on general confidence. Since the middle of July, there had been a slow and patchy, but noticeable growth of confidence and return to normality in pubs. This has put all that into reverse, and returned us to a state of fear and trepidation about what is going to come next. This was not helped by statements from several official figures that people needed to be very cautious about socialising. This sounded disturbingly close to the messages that were coming out in the week in March last year before the pubs were closed entirely for three and a half months.

A particular example was when government medical adviser Dr Jenny Harries told people that they should only socialise where necessary, however that might be defined. This was quickly contradicted by the Prime Minister, who urged people to continue socialising as normal, but the damage had already been done.

In the succeeding week, there has been plenty of evidence that the Omicron variant is relatively mild, and the return of restrictions might have been an over-reaction. It seems to conform to the general evolutionary path of viruses that they become more transmissible but less severe. Many media commentators going well beyond the usual lockdown sceptics have suggested that it was a step too far, and that we couldn’t live in a permanent state of fear.

The government have stated they will review the restrictions in three weeks’ time, and we can hope that they will rescind them, although such back-tracking would lead to a lot of egg on face. But, even then, it would be just a week before Christmas, and too late to rescue much of the holiday season.

On the other hand, there have been reports that they will continue until March. If this proves to be true , it will mean a very long and hard winter for the pub trade.