A taste of freedom – Part 3 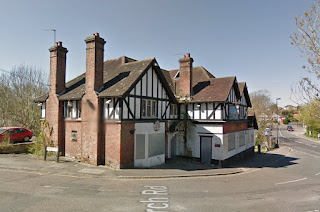 This year, I have made 80 posts on my Closed Pubs blog, the highest figure since the early days of “shooting fish in a barrel” and in fact more than I did on my main blog. I have been helped by prolific suggestions from Kyle Reed in West and South Yorkshire, and Dan Bishop in and around Burton-on-Trent. I have never met either of these gentleman, but a pint will certainly be theirs if I ever get the chance. Some of the images extracted from StreetView are surprisingly picturesque, such as the one above of the Bridge Tavern in Southampton which really conjures up the feeling of a bright Spring day.

My total of Twitter followers has gone up during the year from 5,600 to just over 5,900, so obviously plenty of people find my mixture of serious and more lighthearted stuff interesting. Meanwhile, Toady, who says the things about lockdowns and Covid totalitarianism that Mudgie doesn’t, has passed the 4,000 mark. A recurring problem with Twitter is that, no sooner do you add new followers than they purge another bunch for overstepping the mark in some way. After a change in control, they even suspended their own founder Jack Dorsey, although his account seems to have been reinstated now. 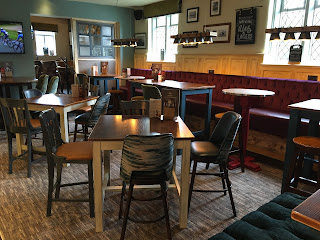 The march of the dreaded posing tables in pubs seems to continue unabated. This year, the handsome Cat & Lion at Stretton, just south of Warrington reopened following a takeover and refurbishment by Holt’s. Much of it is given over to dining, but the main bar area is pretty much full of the things, as shown above. And when you walk into Joule’s impressive new Crown Wharf in Stone, Staffordshire, you are immediately confronted with a forest of them, although there are some more comfortable seats elsewhere. If pubs didn’t have any posing tables, would anyone really bemoan their absence?

In his October Budget, Rishi Sunak announced a thoroughgoing reform of the alcohol duty system. Although the absolute level of duty remains much higher than most comparable European countries, this was a sensible move that recast the system on a much more rational basis and eliminated the many inconsistencies and anomalies of the old structure. Inevitably there were complaints from some special interest groups, as there will always be losers as well as winners, and it remains to be seen to what extent these will be heeded. One aspect that hopefully will be changed is setting the minimum container size for the lower duty rate for draught beer at 40 litres, which excluded both the 4½-gallon pins that are increasingly used for cask ale, and the 30-litre kegs that are popular for craft beers. 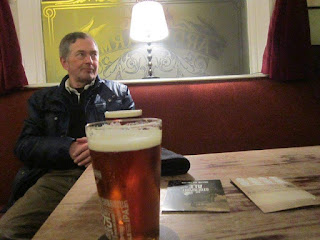 There was sad news in August with the death just before his 65th birthday of longstanding local CAMRA member Stuart Ballantyne. Stuart was always good company, but unfortunately had to contend throughout much of his life with a couple of serious non-alcohol-related health issues. In the early 2000s he was instrumental in leading a campaign to stop Marston’s replacing their own bitter with Banks’s in their pubs in South Manchester. In 2001 I spent several weeks in hospital with a badly broken ankle and will always remember that Stuart made the effort to come and visit me. 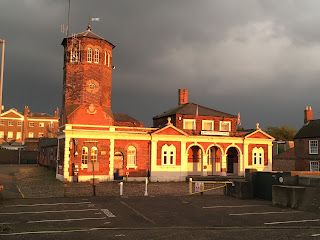 Conscious that I had gone through the whole of 2020 without setting eyes on the sea, I made a point of visiting the nearest expanse, at New Brighton, once I was able. It was a bright sunny day and I had a walk along the promenade, but it still wasn’t possible to go in any of the pubs. I managed to have the holiday in Norfolk that I had cancelled last year, although I wasn’t able to take maximum advantage due to suffering from the dreaded post-Covid cold. You don’t actually see much sea along the North Norfolk Coast, as it tends to be a mile away across salt marshes, so the only actual sight I got was looking west over the Wash at Hunstanton. I took the striking image shown above of the King’s Lynn Conservancy Board building illuminated by the setting sun, with a couple of windows of the Crown & Mitre pub included on the right. 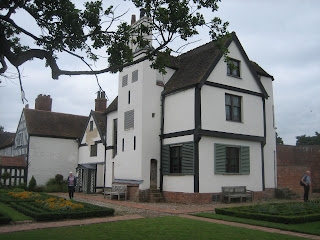 Once everything had opened up again, I was able to get out and visit a number of the historic tourist attractions, although nowhere significant I hadn’t visited before, albeit in some cases over forty years earlier. Probably the most noteworthy was Boscobel House in Shropshire, where Charles II hid in the Royal Oak following his defeat by the Parliamentarians at the Battle of Worcester in 1651. It’s not particularly distinguished architecturally, but it was one place where staff dressed in costume and explaining the story really managed to bring the history to life. 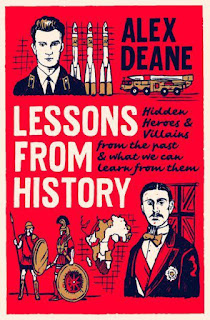 As last year, it’s easy to say that lockdown gives plenty of opportunity to catch up on reading, but it never quite works out like that. But one book I did enjoy was Lessons from History by Alex Deane. This is basically a compendium of short historical anecdotes which are variously inspiring, amusing, poignant, heartwarming or simply jawdropping. It’s presented in easily digestible chunks and so would be ideal for keeping at your bedside and reading two or three chapters before dropping off. It’s a bit late now, but it would make a good stocking-filler for someone with an interest in history.

The episode that made most impression on me, maybe because I had never heard about it before, was Bert Sutcliffe and Bob Blair’s cricketing heroics for New Zealand against South Africa in 1953. Sutcliffe had been hospitalised after being injured by ferocious fast bowling, and Blair’s fiancée had been killed mid-match in the worst train crash in New Zealand history. The rules certainly wouldn’t allow that now!

So we are currently in a situation where pubs in England have been allowed to remain open at least until New Year’s Eve, although there is no guarantee that further restrictions will not be imposed in the New Year, and the general loss of confidence continues to severely depress trade. However, there are plenty of signs that the Omicron variant is nowhere near as severe as many predictions, and more and more politicians and commentators are waking up to the reality of lockdown harms and calling for a more balanced view. So it’s hard to tell which way things will go, but I just hope I’m not here in a year’s time still talking about lockdowns and restrictions on what remains of the hospitality industry.

Follow these links for Part 1 and Part 2 of this review.