All about that Bass 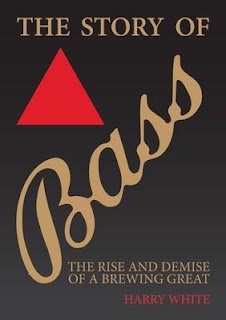 To coincide with National Bass Day last month, Amberley Publishing released The Story of Bass – The Rise and Demise of a Brewing Great by Harry White. It should be made clear, though, that it isn’t a history of the famous beer itself (although that would surely make for a very interesting volume) but a survey of the complex history of the giant corporation that came to bear its name. Harry White worked for Bass and its successor companies in various senior roles until his retirement in 2007, and is now the Chairman of the National Brewery Heritage Trust, so he should have a good knowledge of his subject matter. It’s an attractive, medium-format book with lucid text copiously illustrated by both historic photos and images of old advertising material.

The core of the book is the story of the Bass company itself. Founded in Burton in 1777 by William Bass, from the outset it looked to the wider UK and export markets rather than just supplying its local area, and by the early 1800s was sending beer all round the world. The iconic red triangle became the world’s first registered trade market in 1876, and a bottle of Bass famously appeared in Manet’s picture of a barmaid at the Folies-Bergère in Paris.

However, as with many other breweries of this era, family succession was a problem, with Michael Arthur Bass, who was ennobled as Lord Burton, the last of the Bass dynasty, dying in 1909, and in 1926 a merger was concluded with local rivals Worthington, by this time controlled by the Manners family. Although Worthington was only half the size of Bass, it supplied most of the directors, so this was a kind of reverse takeover.

The merged company was one of the largest in the industry, and was widely regarded as the Rolls-Royce of British brewing. In the 1930s, it was one of the initial constituents of the FT 30 stock market index. However, more than most of its competitors, it depended on selling its beers through other companies’ pubs, and the increasing consolidation of the industry in the 1950s meant that a growing number of outlets became closed off to it.

A solution was at hand in 1961 in the form of a merger with Mitchells & Butlers of Birmingham, who had a large tied estate and were regarded as one of the soundest companies in the industry. The two companies made a good fit with each other. M&B was led by the ambitious Alan Walker, who had joined in 1955 after previously working in the sugar industry. It is interesting that Walker was appointed at the suggestion of the company’s merchant bankers, not the only example in the book of this happening. Walker became managing director of the merged group, so this was another case of a reverse takeover.

The new company still lacked truly national scale, but this was achieved in 1967 through the climactic merger with Charrington United Breweries to create the familiar behemoth of Bass Charrington, of which Alan Walker became Chairman. CUB itself was the result of Canadian entrepreneur E.P. “Eddie” Taylor having built up a chain of British breweries as an outlet for his Carling Black Label lager. This saw a frenzied campaign of acquisitions over two years from 1960, when he merged his Sheffield-based Hope & Anchor Brewery with the large Bradford-based firm of Hammonds, to 1962, when the merger with Charrington, who had a strong presence in London and the South-East, was sealed. This process is described in detail in The Brewing Industry 1950-1990 by Anthony Avis, who was an executive at Hammonds and then CUB who was responsible for acquisitions. Interestingly, while he had considerable respect for Taylor, he had little time for Walker, who he saw as arrogant and domineering.

CUB had a rather random string of pubs and breweries across most of the UK, but were weak in the Midlands, so combining with Bass, Mitchells & Butlers was a good geographical fit. The new company had over 11,000 pubs and was the largest pub and brewing group in Britain. Opportunities for further takeover were limited, but they did carry out a handful, of which the last was Joule’s of Staffordshire, which is still resented locally to this day and was the scene of one of the earliest CAMRA protest marches when the brewery was inevitably closed.

Bass Charrington – later simply “Bass” – was the biggest beast of all amongst the “Big Six” who became the pantomime villains of the brewing scene in the eyes of CAMRA. The book describes the creation of the ill-fated Runcorn brewery, which was intended to replace a string of smaller breweries across the North, but in the end lasted less than twenty years.

With further expansion by acquisition now impossible, and the overall beer market at best stagnant, Bass increasingly saw itself as involved not so much in brewing as the wider leisure industry, and became a substantial owner of hotels. This was confirmed by the ill-judged Beer Orders of 1989 which, by requiring the big brewers to divest large swathes of their tied estates, turned the industry on its head. The pubs were progressively sold off to pubcos, while the breweries were acquired by the international lager brewing giants.

In the case of Bass, most of the brands and brewing assets, including the flagship Carling, passed to Molson Coors, leaving the eponymous Bass brand as something of an orphan of the storm in the hands of AB InBev, with production of the cask version now contracted out to Marston’s. The Bass company still exists, but has metamorphosed into Intercontinental Hotels and now has no connection with British brewing. Indeed, none of the infamous Big Six survive in anything remotely resembling their original form.

At the back of the book is a listing of the most important beers that defined the Bass Charrington empire during its existence. Pride of place has to go to Carling lager, which was the first beer in Britain to sell a million barrels a year, became the country’s best-selling beer in the late 1970s and retains that position to this day.

While it includes the classics of Draught Bass, Worthington White Shield and No. 1 Barley Wine, many of the beers included are cooking bitters such as Springfield and Charrington IPA which were popular in their areas but never approached being considered best in class. It even includes the weak keg bitter Allbright, which was promoted as “The Beer of Wales” and for a time was the best-selling beer in the Principality.

One notable omission is M&B Brew XI, which I believe at one time was the best-selling cask beer in Britain. I never thought much of it when I was at university in Birmingham in the late 70s, but surely it deserves a place in the company’s history. Interestingly, the name was invented by Alan Walker in the late 1950s as a deliberate attempt to copy automotive branding, although Bass Charrington did not enjoy similar success with Brew Ten, intended for their northern estate, which after a few years was largely replaced by Stones.

One thing that is missing from this book, and indeed from that of Anthony Avis too, is any impression of what beers were produced during the wave of merger mania, and how the pubs were branded. For example, in 1965 Charrington United took over the substantial Offiler’s brewery of Derby, which was promptly closed, with beer being supplied from the former Hammond’s plant at Tadcaster. But were these beers sold as Offiler’s, or Hammond’s, or something else? And did they put new branding on the pubs? My drinking years began after the merger mania had worked itself out, but I do remember as a child seeing Bent’s branded pubs dotted around the North-West, a company bought in the 1960s by Bass, Mitchells & Butlers.

In conclusion, it’s a fascinating and very readable book that manages to make sense of a complex and entangled corporate history. It deserves a place on the bookshelf of anyone interested in the development of the brewing industry in Britain. However, at 96 pages, it’s a fairly slight volume, and even in these inflationary times the cover price of £15.99 seems a little steep, although it can be obtained more cheaply from various online retailers. I should state that I paid for my copy (although not £15.99) – I wasn’t sent a free one to review.