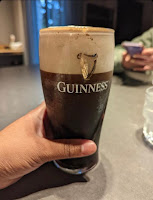 Last weekend there was a Channel 4 programme in the “Inside the Superbrands” series looking at Guinness. I can’t say I was expecting too much from a rather tabloidy format, but in fact it turned out to be surprisingly insightful. Plus it was presently by Carlisle-born Helen Skelton, who has an unmistakeably Northern accent.

One thing that took me by surprise was that it featured the Shit London Guinness Instagram and Twitter account (suitably censored), which highlights poor examples of Guinness served around the capital – see photo above. You might have thought this was bad publicity, but in fact a Guinness representative said that “as soon as we see a post on that account, we aim to be round there within four hours”. It’s performing a valuable quality control function.

And I couldn’t help thinking that cask beer wouldn’t half benefit from quality control that even remotely approached that standard. Obviously it’s different in that Guinness is a single product produced by a single company, but far too often the presentation of cask in pubs is utterly dreadful. Maybe a representative of Cask Marque should follow Martin Taylor on his GBG ticking travels and take action whenever he has to pour one in a plant pot, which seems to happen a lot more often than it should.

There has been some discussion recently over the negative image of cask, but surely its poor presentation is its major problem. All too often, outside familiar pubs, it’s a total lottery. I’ll just offer two examples.

On my trip to Berkshire in May, I was taken to a pub that isn’t in the current Good Beer Guide, but has a pretty decent reputation. Two different beers came out as total soup and were returned. If you have to return two successive pints, you start feeling like a pernickety arse, and on similar occasions in the past I’ve cut my losses and asked for a refund. Eventually we got a good, clear pint, but you shouldn’t have to go through that.

More recently, I went in a pub that had a single cask beer on one of three handpumps. It came out nice and cool, but once I took it back to my seat it was obviously pretty opaque, so it went straight back. “It’s the end of the barrel, but we’re just putting another one on. It’ll be ready in a few minutes”. Fifteen minutes later, it wasn’t, so I settled for a John Smith’s. Perhaps, on reflection, I should have had a Guinness.

I persevere with cask, because I know how good it is when it’s properly kept, but it’s understandable that plenty of others are very wary.

Another problem is that many people who write about cask beer and sing its praises only tend to drink it in “recommended” outlets, so don’t get to share the experience of the typical drinker out in the wild.