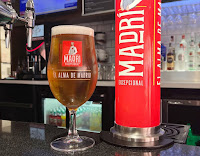 At the beginning of this year, Wetherspoon’s carried out a substantial revamp of their beer range, one of the major elements of which was delisting products from the Heineken Group. This meant the disappearance of two 5.0% ABV draught lagers, Heineken itself and Kronenbourg 1664, leaving the only product remaining at that the strength as San Miguel, owned in the UK by Carlsberg.

5% premium lagers were once one of the leading segments of the British beer market, but recently seem to have become very much eclipsed. What was once its flagship brand, Stella Artois, has been reduced in stages from 5.2% to its current strength of 4.6%. The draught lager range in my local Spoons is now San Miguel, Stella, Corona and Budweiser (both 4.5%), the “premium standard” Coors at 4%, Carling (4%), Carlsberg (3.8%) and Bud Light (3.5%)

There’s nothing inherently wrong with beers of any particular strength, although it’s probably fair to say that few beers are improved by being made weaker. Obviously there is a duty saving to brewers, but it may well be that less strong premium lagers suit customer preferences in making them more sessionable and keeping a slightly clearer head.

When I have written about this in the past, I have suggested there might well be some degree of customer kickback, but this doesn’t seem to have happened. But, whatever the motivation, it certainly represents a major shift in the beer market. There has been a similar movement in the cask market, where beers of 5% and above don’t find many takers nowadays, and a number have had their strength cut.

A new product category has been devised for these products – Mediterranean Lager – which encompasses those of both Spanish and Italian identity. To get a share of the action, in 2020 Molson Coors launched a new product, Madri Excepcional, which has been very heavily promoted in the succeeding two years. While this may appear to be of Spanish origin, it is in fact an entirely concocted brand that bears no relation to anything actually sold in the Spanish market, as explained in this article, which is basically a recycling of a press release.

This will cause much harrumphing amongst those still outraged by the fact the Wainwright is brewed in Wolverhampton, but the fact of the matter is most drinkers are no longer particularly concerned about authenticity and provenance, as I wrote back in 2011. This is a point reinforced by this article hanging on the recent closure of Jennings. Nobody is being deceived, as having a product with the vague trappings of Spanish or Italian style is sufficient. There are plenty of examples in the general food and drink field of products that lay claim to a particular national identity but in fact have little or no presence in their supposed home markets.

I was recently in my local convenience store where the two lager brands being heavily promoted were Madri and Moretti (owned by Heineken), both 4.6%, which certainly would not have been the case five years ago. And I suspect in the current climate it would be very difficult for any major brewer to launch a new mass-market 5.0% lager brand. If you do want an authentic British 5% lager, though, you could do a lot worse than Samuel Smith’s Pure Brewed.