A diet of worms 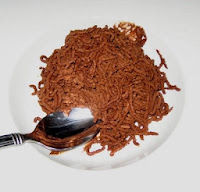 There was recently a story in the news about the diet secrets of the oldest woman in Europe, who apparently ate eggs, pasta, minced meat and milk and didn’t touch fruit and vegetables. On Twitter, I retweeted someone else’s message about this suggesting “five-a-day” wasn’t a magic prescription for long life, and received a surprisingly angry riposte along the lines of “well, that doesn’t prove anything!” Of course it doesn’t, but on the other hand it’s yet more anecdotal evidence that sticking to the dietary prescriptions of the health establishment is no guarantee of long life, and neither does ignoring them prevent it being achieved.

From time to time, stories appear in the media about people who seem to get along fine despite eating very limited diets. For example, a few years ago, there was this one about a boy who allegedly ate little but jam sandwiches, but nevertheless had grown to be 6’2” and an active sportsman. And recently there has been the case of an attractive young woman called Faye Campbell who claimed to survive on pizzas, cheeseburgers and chips, washed down with Lucozade and Coke. I mentioned this on Twitter too and received numerous responses along the lines of “she must have scurvy” and “she’ll get bowel cancer” – but the news report suggests that overall she is in pretty good health.

All this demonstrates that the human body is a pretty robust organism and can thrive on all kinds of diets. If you look across the world, there must be huge variations in diet between different cultures, and I doubt whether Eskimos get five-a-day or anything like it. In practice, these people’s diets are probably not quite so exclusive as they claim, and there are nutrients concealed in all kinds of supposedly “unhealthy” foods and drinks – even beer. Bread, flour and breakfast cereals are routinely fortified with a variety of vitamins, in some cases by law.

In reality, there are a surprising number of people whose diets are restricted to a greater or lesser extent by a psychological aversion to certain foods. It isn’t a case of just not liking things, but being simply unable to eat them. Sometimes, although by no means always, this is associated with autistic spectrum conditions such as Asperger’s Syndrome. Christopher Boone, the Asperger’s hero of The Curious Incident of the Dog in the Night-Time, is unable to stomach anything brown, while others can’t eat anything that isn’t brown. This is something that is underappreciated by pubs, cafés and restaurants, who continue to insist that customers have specific combinations of foodstuffs rather than encouraging a more mix-and-match approach.

Clearly if you completely fail to obtain certain nutrients, you are going to suffer health problems relating to dietary deficiencies, as thousands of scurvy-ridden sailors found out in the age of sail. But this surely suggests that we are being seriously over-prescriptive in the official dietary guidance that is issued. The “five-a-day” concept was derived from taking the average per capita consumption of fruit and vegetables in California and doubling it, and has no scientific basis. There must be huge numbers of people who reach a ripe old age without ever having consumed five-a-day or anything like it. Likewise, the official alcohol consumption guidelines were plucked out of the air and roughly represented a halving of what scientists considered was a realistic level of what people could consume and still maintain reasonable health.

These guidelines are not in themselves bad advice – you won’t harm yourself by eating five-a-day, or restricting your alcohol intake to below 21 units a week. But the problem is that the implications of not adhering to them are grossly exaggerated, and they come to be presented as “essential” or “maximum limits” rather than simply some kind of desirable ideal. There is no cliff of risk, just a very gentle gradient. As Simon Jenkins argued in the article I linked to here (now behind the Murdoch paywall), the gulf between what is ideal and what is unacceptable is being narrowed all the time.

Posted by Curmudgeon at 3:39 pm