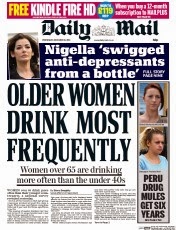 This week, the alcohol consumption figures from the Office for National Statistics’ annual Lifestyle Survey were published. They showed a continued across-the-board fall, which is no doubt welcome news to the anti-drink lobby and was soberly reported as such by the Morning Advertiser under the headline Consumers drinking more responsibly.

However, given that the fall was steepest amongst the youngest age group, much of the press chose to whip up a predictable moral panic about older people drinking, with the Times saying “More pensioners are retiring to the bottle” (article behind paywall), the Telegraph referring to “unrepentant” middle-aged and elderly drinkers and the Mail coming up with a characteristic shock front-page headline Older women drink most frequently. As the Telegraph reports:


Middle aged and elderly people are ignoring warnings about excessive alcohol consumption as younger people turn their back on the daily after-work drink, official figures suggest.

People between the ages of 45 and 65 are now more than twice as likely to drink alcohol every day of the week than the those in their late 20s, 30s and early 40s, figures from the Office for National Statistics show.

And although middle aged Britons have reduced their intake in the last seven years, they have done so at only half the rate of those in the younger generation.

Strikingly, the figures show that pensioners have barely cut back at all and on some measures actually increased their drinking over the same period.

Over 65s drink as regularly as students – although in smaller quantities.

However, attempts to portray this as some kind of public health timebomb really do not stack up, despite the claims of anti-drink zealots like Eric Appleby of Alcohol Concern. In fact, less than one in ten pensioners are exceeding the official government guidelines (which many would consider err on the side of caution anyway), and only 2% can be classified as “heavy drinkers”. That hardly sounds like an epidemic to me.

It has long been recognised that, as they grow older, people tend to drink less per session, but on more occasions through the week. You can’t on the one hand criticise the young for binge-drinking and the elderly for drinking every day, as one is the mirror image of the other. And it’s always seemed to me intuitive that drinking three units seven times a week is not realistically going to do you any more harm than drinking eleven units twice a week, and may even expose you to less risk.

The point must also be made that you need to drink substantially more than the official guidelines for any significant increase in health risk – they do not represent the cliff-edge of risk that they are often portrayed as. And the older age groups are still on average drinking less than they did ten years ago.

The steep decline in drinking amongst the younger age group must be a concern for both the overall drinks industry and specifically the pub and bar trade, though. Over 50% of those in the 16-24 group had not had an alcoholic drink at all in the past week when surveyed. There has been a distinct shift in attitudes with abstention being seen as fashionable and drinking regarded as uncool. As this cohort grow older these attitudes will have an increasing effect on the wider market. Before too long, we may be back to the situation of the late 1950s when pubs were regarded as being for the staid and elderly and were shunned by the rock’n’roll generation. Urban craft hipsters, you are the exception, not the rule.