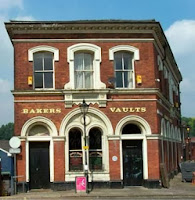 I wrote recently about how Robinson’s had been carrying out a cull of their pub estate, and suggested that there were one or two more that didn’t look long for this world. However, one that I didn’t see as being vulnerable was the Baker’s Vaults on Stockport Market Place. It’s a prominent pub in a distinctive early-Victorian Italianate style which over the years has gained a considerable reputation for live music. It also many years ago hosted a Christmas meal for the local CAMRA branch at which the late, great Michael Jackson was the guest speaker.

However, it is reported that it closed its doors last Saturday night, with the tenants blaming “the costs of Robinson’s beer, the high cost of renting the building, the extortionate cost of business rates from Stockport Council, and the ridiculous cost of utilities.” Now, I suspect Robinson’s may try to find new tenants for this one, given that to my mind it still does have a strong innate appeal, but it does highlight a problem that affects many Robinson’s pubs in less well-heeled areas.

Traditionally, Robinson’s, unlike some other family brewers, never set out to be cheap as such. Their prices were typically comparable with, or maybe just a little below, those of the national or quasi-national brewers such as Wilson’s, Tetley’s, Whitbread and Greenall’s, who in many of their trading areas were their main competitors. However, as the Big Six metamorphosed into pubcos, and they started winnowing out their estates in town centres and inner-urban areas, over the years Robinson’s found that the competition in places like Stockport town centre had turned into Wetherspoon’s, Sam Smith’s, Holt’s and various free trade operators running pub company cast offs. What all of those have in common is that they are significantly cheaper.

It seems that the cost structure Robinson’s offer to their tenants makes it very difficult for them to be competitive in such an environment. The Baker’s Vaults was probably charging about £2.60 for a pint of bitter, but you have to have a good reason to go there when you can be paying just £1.80 across the road in Sam Smith’s Boar’s Head, and £2.15 a couple of minutes away in Wetherspoon’s. I was told a story of how a group of friends had started getting a taxi to a free trade pub for their regular Friday night out because the beer was 80p a pint cheaper than in their Robinson’s local, so they didn’t have to drink that much for it to pay for itself.

Obviously with any pub closure there is usually more than meets the eye, and some Robinson’s pubs not too far away like the Arden Arms and the Red Bull still seem to thrive despite charging a price premium. However, there’s plenty of anecdotal evidence that their tenants are often struggling to be remotely competitive on price. It’s not so much of a problem for their dining pubs where typical prices are higher and price competition is not so intense. But unless Robinson’s can come up with some way of offering their urban tenants a better value-for-money proposition we are likely to see more closures in the coming year.