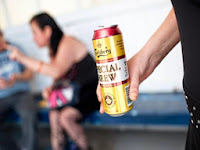 The Grocer reports that the Portman Group are planning to introduce portion control for alcohol packages, preventing retailers from selling cans of beer or cider containing more than four units of alcohol, the recommended daily limit for a man, or resealable plastic bottles containing more than 15 units.

On its own, this is hardly the end of the world as, after all, there’s already plenty of legislation covering the measures in which drinks can be sold in both the on- and off-trade. If the maximum size is limited, you can always just buy two. Some years ago, confectionery companies were dissuaded from selling giant-size chocolate bars, so responded by just including two smaller bars of the same total size in a pack.

However, once again it’s a case of targeting beer and cider, when plenty of wine is sold in non-resealable bottles containing well over 4 units, and a standard bottle of spirits would prove a lethal dose for many people if all consumed at once. You can easily buy a litre bottle of own-brand sherry at 17% ABV for around £7, which is a similar price and alcohol quantity to a four-pack of Special Brew.

It also sets a disturbing precedent in that the recommendations of a private trade association are likely to be adopted by the government and built into licensing conditions. This could be regarded as restraint of trade favouring the established big companies over small producers and new entrants to the market. And it could easily have unintended consequences for strong Belgian beers which are often sold in 750ml bottles, and for farmhouse cidermakers, neither of which can be regarded as the main culprits in encouraging problem drinking.