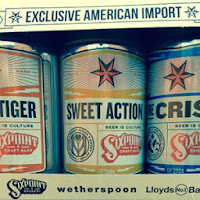 Earlier this year, Wetherspoon’s introduced a range of three canned American craft beers from the Sixpoint Brewery. The initial pricing was £2.89 per can (or £2.50 for two) which I thought was a bit offputting. But, on my most recent visit, the price had been cut to £1.99, so I thought I would give one a go.

Perhaps perversely, I went for the Sweet Action which, according to various reviews I’ve read, is the least impressive of the three. However, I wanted to try something different, whereas the Crisp and Bengali Tiger are both in recognisable styles. Spoons provide you with a nice stemmed tulip-shape glass to drink it out of.

I was taken aback, though, to find it was not just hazy, but totally opaque. You really don’t expect that from a canned beer. It tasted OK, to be honest, in a characteristic American “hoppy but with good malt underpinning” way, although perhaps a bit muddy. But maybe it would be a good idea to let customers know that the beer was, say, “naturally hazy”. There are in-depth reviews of all three here – I thought the Sweet Action was more hoppy and less creamy than the reviewer. Perhaps I should complain that I was never sent a three-pack for review.

Next time I’m in Spoons I may try the other two. From reading web reviews the Crisp should be crystal clear while the Bengali Tiger might have a slight protein haze. They all come across, though, as the kind of thing you would try once but probably wouldn’t make a regular tipple. You also have to wonder whether the price cut means they aren’t selling well. Might we see them appearing on the shelves of Home Bargains?