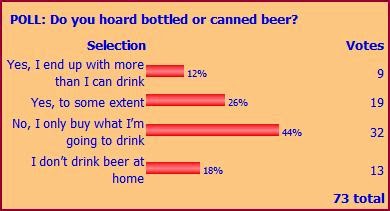 Over the years I’ve met a number of people who buy themselves a lot of exotic bottled beers and end up with more than they can drink. Some have even held informal parties to drink up their stock. It’s not something I’ve ever really done myself, except maybe laying in a few special beers for Christmas and New Year – I tend to just buy what I intend to consume in the next week or so. No doubt Cooking Lager would say “Mudgie’s such an alkie that any grog in his gaff is going to get necked – it won’t hang around.”

There have recently been a series of posts on the Beer Compurgation blog, such as this one, where the author says:


“The downfall of being a great beer lover and enthusiast is a tendency to hoard. Nobody I know is as guilty of this as I. As such, I've come to realise in recent months that I really need to start working through my already sizeable bottle stock before purchasing anything else this year, if for no other reason than to try the beers I’ve spent my money on whilst they’re still at their best. Added to this is the realisation over the last few months – based on certain depressive life situations – that life is too short not to drink the great beers I have available to me. I also need to find new encouragement and inspiration to write again. I have never wanted this to be a beer review blog (with the exception of Advent) but all the above factors have led me to begin a series of “Stock Clearance” posts where I drink beers within my hoard that really need drinking for reasons that will be explained.”

So this prompted me to run a poll to see just how common beer hoarding was. The results show that, while a majority of respondents only bought what they planned to drink, quite a few did allow stocks to build up, with 12% ending up in the category of ending up with more than they could drink.
Posted by Curmudgeon at 3:56 pm