The future may not be real 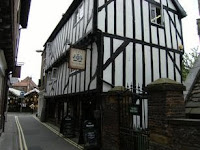 Regular readers of the blog will be aware of my appreciation of the architectural and beery delights of the city of York. On my most recent visit, prompted by this posting by The Beer Nut, I called in at Pivo, housed in an ancient half-timbered building just off the main shopping street, which bills itself as a “world beer free house”. It has three cask beers, but its unique proposition is a range of about ten unusual imported beers served on draught (in keg form), mostly in the proper branded glassware – with half-pint and pint lines. It’s not the usual suspects, either, no Krombacher and Hoegaarden here. There were even British kegs from Meantime. The prices aren’t as steep as you might expect, with the 4.7% ABV Czech lager Bernard Svetly Lezak at a mere £1.45 a half, which is probably less than the usual price of Stella in York. It seems to attract a youngish, upmarket clientèle, and it was striking to see groups of them happily supping and discussing exotic, often cloudy beer. It may not appeal to the old-time Mild and Bitter diehards, but it has to be said that this kind of bar (regrettably all too rare) feels far more forward-looking and aspirational than a bare-boards boozer serving Slutty Sally and Old Disreputable.

Having said that, the Swan on Clementhorpe is a traditional pub par excellence, with a range of six cask beers and a great atmosphere and, to be honest, somewhere I personally feel more at home.