No room at the inn 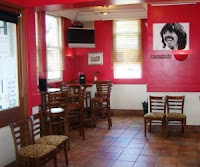 Today I called in to the Salopian Bar in Shrewsbury, the current Shropshire CAMRA Pub of the Year. Good range of mostly local real ales, a few proper real kegs, plenty of interesting bottles. So you can understand why it won the award. But there was a disappointing dearth of decent seating. There is a central bar and three distinct areas. One had a few high-level posing tables, the second expansive, low-level sofas that allow one to sit where five could normally be accommodated, and only the third had normal chairs at tables, albeit no benches even there. If the pub had standard wall-mounted bench seating in all three areas it could probably cater for three times as many seated customers. Surely the lack of seating must impact on trade – it baffles me why pub owners sacrifice capacity in this way in the interest of appearing trendy. The picture shows the aforementioned posing tables and gives a good idea of the general not-very-pubby ambiance.

Wetherspoon’s are another major offender – I have been in plenty of their pubs which hardly seemed busy yet all the tables were taken. If they used wall benches they would be able to accommodate lots more seated customers. But apparently benches make a pub look old-fashioned. So it goes, I suppose, can’t be having too many people in pubs otherwise they might be too successful.

If you’re in Shrewsbury, the Admiral Benbow is a must-visit pub, with a wide range of local real ales and ciders, and plenty of comfortable bench seating too. Unfortunately it only opens at lunchtimes on Saturdays.

Incidentally, I was followed around Shrewsbury by a rowdy, youthful stag party, including a guy wearing a pink smock and horns. Not surprisingly, they were served in Wetherspoon's, somewhat more surprisingly they were served in the Armoury, the up-market Brunning & Price pub. How often do you hear the cry “lagers all round” in there? I suspect a more mature barperson might have asked them to take their custom elsewhere, as some of the clientele were visibly flinching. Encouragingly, they then went into the Admiral Benbow and seemed to be politely told that wasn't quite their type of pub. Nothing wrong with rowdy stag parties as such, but some pubs aren't the place for them.