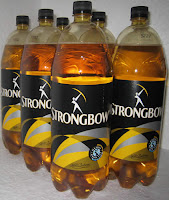 Apparently the government are contemplating a significant rise in cider duty. Now, I remember the last time I mentioned this subject I was accused of having no idea what I was talking about, so I will try to tread carefully. But it’s very noticeable that draught Strongbow, although only 4.5% ABV, sells in pubs at a similar price to Guinness and Stella, and well above the price of cask beers of comparable strength. Does that mean that Strongbow is more expensive to produce, or that Bulmers are making a higher profit margin on it?

On the other hand, it is equally noticeable that the most bangs per buck you can get on the off-licence shelves comes from 2- or 3-litre PET bottles of cider, either white or “standard” brown. Often the price per unit of these ciders is only about half that of the super-strength lagers that attract so much criticism. Nobody can tell me that people are drinking this stuff because of the refreshing taste and not because it gets you pissed cheaply.

So it could be argued that the fact that the duty on cider is much lower than that on beer is at the same time featherbedding the dominant player in the cider market and encouraging irresponsible bottom-end drinking.

I am well aware that there are many small independent cidermakers who might suffer from an across-the-board duty increase. But, provided that there was a cider equivalent of Progressive Beer Duty to protect them, it is hard to justify the retention of a duty differential between cider and beer.
Posted by Curmudgeon on February 19, 2010