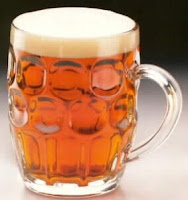 I was surprised yesterday in a pub to be served with a pint in a dimpled mug. I remember when the “handle glass” was widespread, but was seen as stuffy and pretentious, and I – along with many others – made a point of asking for a straight glass, or a “sleever” as it was called in the West Country. Nowadays, while many pubs still keep a few behind the bar for some of their older customers, it’s rare indeed to be given one by default. Do they, I wonder, subtly change the character of the beer by exposing a greater surface area of head to the atmosphere?
Posted by Curmudgeon on March 21, 2010