Bring me my bow 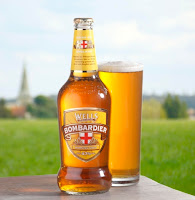 Wells Bombardier is one of the best-selling premium cask beers in Britain, but it’s one that I’ve never really taken to. I’m not saying it’s a bad beer, but it has a distinctive kind of almost chewy maltiness that doesn’t appeal to me. Having said that, on a couple of occasions in the past year I’ve come across very well kept examples when it’s been the only cask beer in a pub.

In recent years, Wells have come up with a couple of “brand extensions” to Bombardier, building on the theme of “The Drink of England” by using phrases from Blake’s Jerusalem. One was the dark, rich, almost stouty Satanic Mills, which got some good reviews but now seems to have been delisted. The other is Burning Gold, which is still very much with us. The website says it is available as a seasonal cask beer as well as in bottle, but I can’t recall ever coming across it in the pub.

This has a strength of 4.7% ABV and comes in a clear bottle which shows off its appealing bright orange-gold colour, darker than most beers bearing the name “Gold”, which looks very good once in the glass. It has a fairly thin but lasting head and noticeable carbonation. There’s a subdued initial aroma of malt and fruit.

It’s a basically dry beer with a good balance of both malt and hops and some fruity notes. It’s quite a “big”, assertive, full-bodied beer in comparison with the understated London Gold, and isn’t truly in the characteristic floral, fragrant golden ale style, which to my mind is a plus point.

A distinctive and highly drinkable golden ale which has a much more robust character than many of the genre. It’s too strong to really be called a session beer, but certainly something you could happily drink more than one of.
Posted by Curmudgeon on November 03, 2010