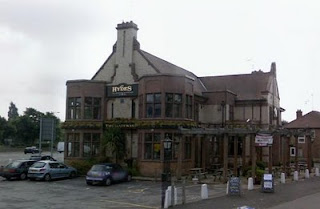 I noticed the other day on Fleurets’ website that Hydes had put the Gateway pub on the market for £1 million freehold. This is a prominent 1930s roadhouse type pub at East Didsbury on the main A34 Kingsway road into Manchester from the south. It’s a prosperous area with plenty of housing nearby. Yet clearly Hydes don’t believe it’s viable as a pub, and I’d be very surprised if any other operator thought they could do better.

This very much gives the lie to those who still believe that having plenty of chimneypots nearby guarantees a pub a healthy trade if run even half decently. Clearly, it doesn’t, and indeed it is the large, purpose-built 20th century pubs that seem to have suffered worst from the recent tide of closures. Only a few months ago, the similar Greyhound in Adswood closed its doors for the last time and has now been flattened. In contrast, a mile down the road, pubs are thriving on the Didsbury village drinking circuit. A brewery representative said:


“...the ethnic mix and the ages of the residents that live behind the Gateway make it difficult to draw trade to the pub. There are large numbers of elderly residents and non British groups who for ethnic and religious reasons are not regular pub visitors. So it’s the pub’s catchment area that is against the pub rather than the competence or otherwise of the brewery. The cinema/bowling alley/fast food complex opposite does the Gateway no favours as it attracts mainly teenagers who will not visit a ‘pub that their dad might visit’”.

The role of changes in the social mix of an area in affecting the viability of pubs has often been underestimated. It’s a simple fact of life that for cultural reasons people of South Asian origin aren’t going to visit pubs to anything like the same extent as the indigenous British and Irish, and nothing pubs do short of closing down and becoming Indian restaurants is going to change that.

One possible solution for the Gateway could have been to build an accommodation lodge next door and turn it explicitly into a dining venue. Only just up the road, on the other side of the leisure complex, a new, purpose-built pub, the Bell House, does precisely that. But the Gateway, on a cramped site in the fork between two major roads, just didn’t have the room for extra car parking or new construction, and so it has paid the price. It won’t be the last, either.
Posted by Curmudgeon on November 02, 2010