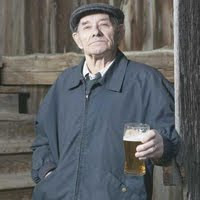 The latest piece of foaming anti-drink hysteria is a report from the Royal College of Psychiatrists which says that the already made-up and absurdly low alcohol consumption guidelines should be “drastically reduced” for people over 65. They should drink only 1.5 “units” of alcohol a day, the equivalent of half a pint of beer or a small glass of wine. I’m sure that’s going to soothe the cares of the world away. Leave off that 500ml bottle of Pedigree, it’s far too much for you! You’ll have that 2% Tesco Value Bitter and enjoy it!


A group of experts from the Royal College of Psychiatrists says there is a growing problem with substance abuse among older people, who they describe as society's "invisible addicts".

The report says a third those who experience problems with alcohol abuse do so later on in life, often as a result of big changes like retirement, bereavement or feelings of boredom, loneliness and depression.

But the extent of the drinking is hidden because unlike younger drinkers, more older people drink in their own homes, the report suggests.

The problem is exacerbated by the widespread use - and misuse - of prescribed and over-the-counter medicines among elderly people which can interact badly with alcohol.

Compounding the problems are the changes our bodies undergo as we get older which mean we are less able to cope with the effects of alcohol.


If it’s a “hidden” problem, in what way is it a problem at all? It’s not as if the Old Gits are rampaging through the weekend streets brawling and puking.

For many older people, having a regular couple of drinks is one of the few pleasures they’re still able to enjoy. In my experience, the vast majority settle down to a ritualised routine of moderate drinking and rarely if ever overdo it. In the last years of his life, my late father (who lived to 91) would have one pint or bottle or can before his lunch, and one small whisky or sherry before his tea, and that was it. But even that would have been 3 or 4 units a day.

In any case, if you’re in the twilight of your years and can see the Grim Reaper coming over the horizon, the argument that abstaining from drink will prolong your life is unlikely to carry much weight.

It also seems that they want doctors to do yet more prying every time you go into the surgery with a minor ailment:


They also want GPs to screen every person over the age of 65 for substance misuse, along with health campaigns around drugs and alcohol specifically targeting older people.

Also, typical of the BBC and its unquestioning obeisance to the Bully State, there isn’t a single dissenting or sceptical opinion quoted in the report.

The comments on the article are, however, well worth reading:


So now we have to work on past the age where scientists are telling us we cannot tolerate alcohol due to health issues, we are susceptible to injury and are over the hill. But we need to keep working to support junkies and those who scrounge off the system. At this rate it is cradle to grave and don't think you are getting a pension as you will just drink it. By the time I retire I will be dead.

I was amused by one comment that this guideline limit was so low that they were obviously now trying to treat alcohol abuse by homeopathy.
Posted by Curmudgeon on June 22, 2011