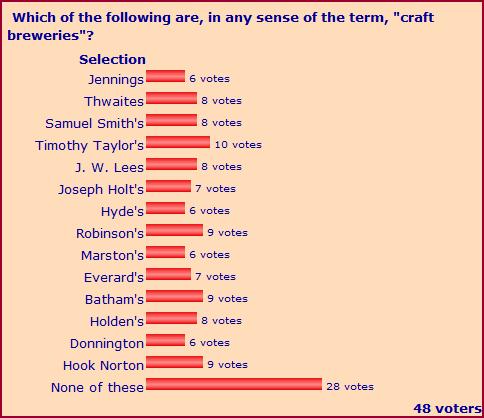 Prompted by this post about Fuller’s on Eating isn’t Cheating, I asked which of the family brewers in the North-West, Yorkshire and the Midlands people considered to be in any sense “craft breweries”. For what it’s worth, I wasn’t “expecting” any particular outcome from this. But the result is quite clear – 28 out of 48 respondents (58%) didn’t think any of them were. Does this mean that people don’t feel any brewery that was trading in 1972 can be a craft brewery, or that they don’t think much of the concept in general?

This certainly contradicts the statement made by Boak & Bailey and others that most British real ale qualifies as “craft beer”.

Of those who did, Timothy Taylor’s were marginal leaders with 10 votes, despite the fact that they do not produce either seasonal beers or “interesting” bottles. Robinson’s, Batham’s and Hook Norton were joint second with 9, while, perhaps surprisingly, Donnington, who must be the smallest and most truly “artisanal” of all, were joint bottom with 6.

My personal view, which I’ve said before, is that the concept of “craft beer” maybe causes more problems than it solves, but if it means anything it means beers that are knowingly produced to have a specific appeal to beer enthusiasts, in a sense that standard cask and bottled beers aren’t.
Posted by Curmudgeon on January 18, 2012