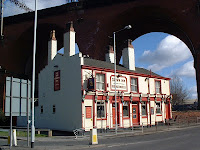 There’s an interesting post here by Boak & Bailey about the development of the “alterno-beer” movement in the UK. One point I made in the comments was that the dedicated “beer exhibition” pub, where the choice of beer was the main attraction, very much predates “craft beer” and indeed was firmly established not long after the birth of CAMRA.

A quick look through the 1979 Good Beer Guide reveals establishments like the Barley Mow at Tyttenhanger Green in Hertfordshire, the Duck on the Hagley Road in Birmingham, the Bat & Ball in Farnham, Surrey and the Windmill at Whiteley Green in Cheshire, all offering a choice of six to twelve beers from a variety of breweries. Clearly the demand for pubs of this type was already strongly established. I seem to remember the Barley Mow (now, sadly, I believe, closed) being described in one GBG as “more a beer exhibition than a pub”.

In about 1983 I remember being taken to the Fighting Cocks in Bradford, in an out-of-the-way spot on an inner-city industrial estate, but with a then incredible range of beers. The Duck & Drake on Kirkgate in Leeds was up and running in the mid-80s, and I think the Beer House in Manchester became a multi-beer pub around 1986 or 1987. The Crown in Stockport (pictured) dates back to maybe 1991, and by this time the concept had become so popular that it was being taken up by established breweries. Cameron’s converted a number of pubs to the Tap & Spile format, and Whitbread followed suit with the copycat “Tut & Shive”, which ended up being nicknamed “Tub o’shite”. By this time, there would have been few substantial towns in England at least without at lease one specialist beer pub with a bar groaning with handpumps.

Of course, as I wrote at the time, the Achilles heel of many of these venues was quality – if you’re serving twelve different beers, without the turnover necessary to sustain them, especially at slacker times, many will be warm at best and Sarson’s at worst. This inevitably led to something of a retrenchment during the mid-1990s.

My comment that “The more people who care about beer who drink in the multi-beer ‘freehouse’, the fewer there are to complain when their local switches over to nitrokeg” is even more appropriate today, when the beer geeks tick off the rare beers in their favoured 15-pump venue and don’t seem to care about the wider world in which local pubs are dropping like flies.

The Beer Orders led to a general opening up of the tied pub trade and actually, today, I’d say there are probably no more self-proclaimed “specialist beer pubs” than there were twenty years ago. But, in a sense, the wide choice has now gone mainstream, with many operators such as Wetherspoons and Brunning & Price routinely offering a choice of beers that in 1980 would have been considered worthy of an exhibition pub, and five beers a common sight on the bar of a pub company outlet.

Although it wasn’t given huge publicity at a time when the focus was firmly on “real ale”, these pubs often also stocked a good range of imported Belgian, Czech and German beers that you simply wouldn’t find in mainstream outlets.