Not in here you don’t! 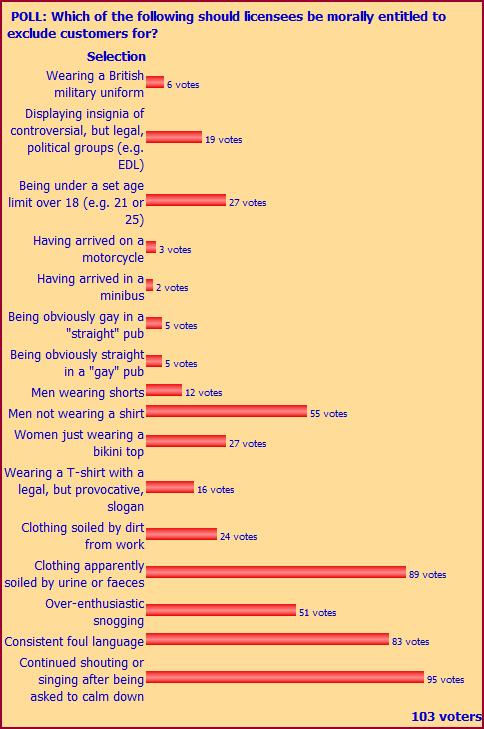 It was recently reported that a group of soldiers wearing their uniform to attend a military funeral had been refused admission to Brown’s Bar in Coventry. Not surprisingly, there was a wave of indignation in the press, and it prompted this post by Pete Green at gettothepub.com suggesting the time has come to abandon any discriminatory restrictions in pubs.

Which is what prompted the poll whose results are displayed above. All of those are things that, at some time, people have been refused admission to, or ejected from, pubs. Most of them still are still applied somewhere even today. Some of them you will probably feel can be justified, others not. A worthy addition would have been “wearing football colours”, suggested by Phil in the comments. Maybe refusing admission to customers with dogs, too.

At least two people thought every one could be justified. “Continued shouting or singing after being asked to calm down” topped the poll, while “Arriving in a minibus” was last. Perhaps surprisingly, 14 out of 103 respondents thought it was acceptable to admit customers wearing clothing apparently soiled by urine or faeces, but, hey, in some run-down areas that might exclude half the clientele.

There is a fundamental tension here, though. Traditionally, it has been regarded as the right of the licensee to admit or exclude whoever he wants. A pub may be “public” but is also a “house” – you are not just buying produce, as in a shop, but buying time in the company of others. A licensee tries to create a particular atmosphere which, while not entirely homogenous, means that all the customers feel reasonably at home with each other. It only takes a small disruptive, intrusive group to spoil that.

However, in recent times there has been a move to outlaw discrimination against people on the grounds of their race, religion or sexual orientation and, more recently, to ensure a level playing field in the provision of goods and services. To a large extent this is a welcome move, but there are some people who perceive discrimination on such grounds when in actual fact they have just been acting like an arse, and cry foul.

In my view, licensees are still fully entitled to impose restrictions on dress and behaviour, so long as they don’t contravene the law, but in today’s climate of political correctness they need to tread much more carefully than they once had to. There is always the point too as to whether you would actually want to visit a pub anyway that didn’t welcome you as a customer.

As a parting shot, while I am no cheerleader for Irish republicanism, might it not be a good idea on at least two levels for a pub with a strong republican ethos to bar people wearing British military uniforms?