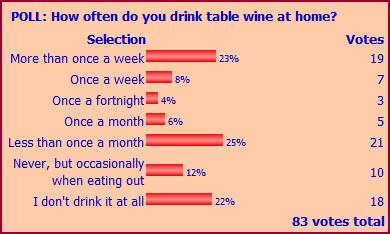 When I was a kid, we never had any drink in the house apart from at Christmas. At Christmas dinner, it was bottles of Greenall’s Bullseye Brown Ale (once I was old enough, I would get a shandy), and a glass of port to follow. It was probably the late 70s before a bottle of Lutomer Riesling actually graced the Christmas dinner table.

But, since then, there has been a dramatic change in British drinking habits. More and more, having a bottle of wine at home has replaced having a few pints down the pub. Between 1980 and 2010, according to the BBPA statistics, wine consumption grew by 148%, while beer consumption fell by 46%. You get the impression that, for many families, and not just those in the comfortable middle classes, cracking open a bottle with the evening meal is now routine.

So I thought I would ask how often people drank wine at home. Obviously the readership of this blog is going to be more beer-focused than the average person, but even so 23% of respondents said they drank wine at home more than once a week, although 59% said they did so less than one a month. There’s a very clear polarisation between frequent drinkers and rare-or-never drinkers. It would be interesting to see what a similar survey of the general population revealed. It would also be interesting to see an analysis of singles vs couples.