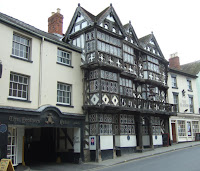 There’s a specific school of writing about pubs that concentrates not so much on either beer or internal fittings, but on their place in Britain’s history, culture and vernacular architectural traditions. At its worst, it can degenerate into a kind of “Ye Olde Innes of Merrie England” theme, but at its best it can illuminate how the development of pubs fits in with the wider world. Much of it can trade its roots to the Arts and Crafts Movement of the late Victorian period which began to recognise value in even humble buildings and was part of the same impetus that gave birth to the National Trust. It tends, it must be said, to have a distinctly middle-class character and places great weight on cathedral cities, market towns and the countryside, but relatively little on industrial areas.

Amongst my collection of pub and beer related books is one called The English Inn by John Burke, which was published in 1981, but in many ways comes across as redolent of an earlier era. The cover picture is of the Feathers in Ludlow, pictured right. There’s a chapter on what you’re letting yourself in for if you take on a pub, but the bulk of it is devoted to the usual run-through of Chaucer, the Pilgrims’ Way, the great coaching routes and maritime hostelries. It is copiously illustrated with photos of the usual suspects such as the Crown at Chiddingfold, the George & Pilgrims at Glastonbury and the Trip to Jerusalem in Nottingham.

There’s a final chapter on the current situation and the future of the pub, in which the author complains that “now every hostelry is suffused with the smell of frying chips, of scampi and chicken and steak, and sizzling with music... if that is the word”. But he does say, possibly peering through a pair of rose-tinted spectacles, that “The good places are still there for the finding. There is still, somewhere, that unspoilt country inn off the beaten track, sustained by local hospitality and local conversation... the knowledgeable talk of a living community, accompanied by beer from a local independent brewery”.

CAMRA’s laudable National Inventory of Historic Pub Interiors leads on from this, although in this case the emphasis is on untouched interiors, not external architecture, however important in heritage terms. It is quite striking just how few of the well-known classic inns from the pre-industrial era feature on the National Inventory. Their interiors will only have been fitted out as pubs, as now understood, many years after their original construction and in most cases will have been further altered many times down to the present day. Indeed I have been in some pubs over the years with exteriors of considerable architectural merit which internally have been completely gutted and deprived of any vestige of character.

On the other hand, I have recently been reading The Book of Beer by Andrew Campbell from 1956, which includes a lengthy section on “Old Inns”, mostly around the London area, and says that “some 2,348 old inns had been listed by the end of 1954 by the Ministry of Housing and Local Government as being of some historical or architectural interest”. Rather surprisingly, it says that “Edinburgh is on the whole disappointing”, when it is now recognised that the city, per head of population, has probably the finest set of unspoilt original pub interiors in the whole of the British Isles.

It was a commonplace of guidebooks from the inter-war period and the 1950s to refer to the presence of numerous inns as defining features of High Streets, especially in towns on former coaching routes. However, many of the old coaching inns have now been turned into shopping malls, and where they remain they are often now upmarket boutique hotels that have largely severed their connection with pubs as such. While a modern guide book might point out a particular building of architectural importance, it would be unlikely to refer in general terms to a town’s “quaint old inns”.

As I have written here, in the early years of CAMRA great store was put on pubs being “traditional” and “unspoilt” and, other things being equal, the more olde-worlde ones were often given more prominence in pub guides. Times have changed though, and nowadays the “shock of the new” seems to be dominant in the beer world, and anything ten years old, let alone two hundred, is all too readily dismissed as old hat. But at least some of the classic pubs will still be there when the last industrial-themed craft beer bar has been transformed into a sushi diner or whatever the latest ephemeral urban hipster fad is, and by failing to give due regard to the continuing story of the pub through the centuries something valuable is being lost.

Ironically, as I was putting this piece together, Boak and Bailey posted a photo gallery of Old Inns of England from 1906 which is a perfect example of the theme.