Reasons to be fearful

Interesting results (and a massive turnout) for my poll on reasons deterring people from visiting pubs. I created this as a response to various discussions as to whether the decline of pubs was inevitable or could be reversed. The intention behind it was to ask what reasons led people to visit pubs less than they once did, not why they were put off from specific pubs. 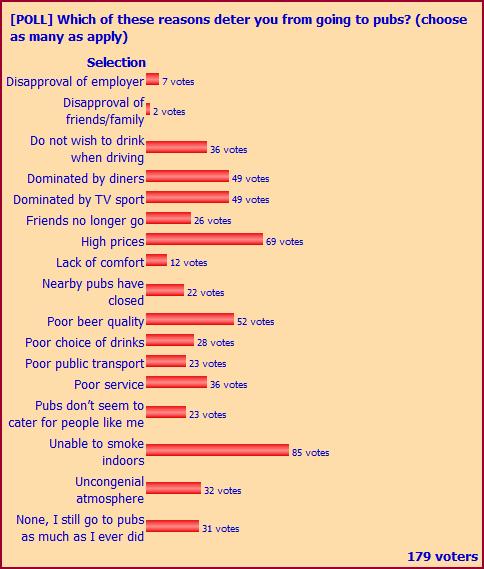 Not surprisingly, “unable to smoke indoors” came top, with 47% of total votes, and 57% of those who were deterred to some extent. “High prices” was a strong second, and I’ll be devoting a post to that subject later in the week.

Third was “Poor beer quality” – surely it’s a sad day when so many people are put off going to pubs in general because they worry they’ll get a poor pint. Note that “Poor choice of drinks” was a separate option and scored much less.

Then, neck-and-neck, came two factors that I have extensively discussed over the past few years – “Dominated by diners” and “Dominated by TV sport”. While dining and sport have their place in pubs, if they are allowed to dominate to the exclusion of all else then the large number of customers who aren’t interested in one or both will be put off.

“Disapproval of employer” didn’t seem to be a major factor despite the widely-reported decline in lunchtime drinking, and “Disapproval of family/friends” only attracted a couple of votes.

31 people, or 17% of the total, said they visited pubs as much as they ever did.

Posted by Curmudgeon at 5:53 pm