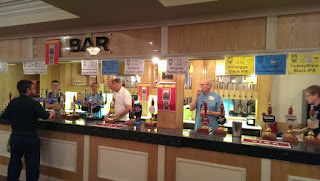 It’s now almost forty years since CAMRA held its first national beer festival at Covent Garden in London. Since then, the number of beer festivals has mushroomed and, alongside the Good Beer Guide, they are the aspect of CAMRA’s activities most visible to the general public. From being an opportunity to showcase beers you might want to seek out in the pub, they have become an attraction in their own right, often featuring new and rare beers you would be lucky to find anywhere else.

In the early days of beer festivals, it made sense to stagger putting the various beers on sale, as there was always a risk of not selling out, so you might want to sell unbroached casks on to local free trade pubs. This also had the advantages that, if the festival lasted more than one day, choice would be maintained throughout and the chance of getting tired beer towards the end would be much reduced.

However, in more recent years, this approach has attracted growing criticism, partly, although not entirely, from the beer-ticking fraternity. You never know when each beer is going to be on sale, and it seems unreasonable to withhold a beer when it’s perfectly read to be served. So the preference is increasingly to put all beers on sale at the beginning of the festival, and when they run out, they run out. At one time, customers were happy that a beer festival simply a provided a decent choice of unfamiliar beers, but now some are much more insistent on being able to sample a particular new or rare beer. This way, at least they know they will be able to find it on at the start.

Obvious drawbacks are that, with the best will in the world, beer stillaged in a beer festival is likely to lose its sparkle more quickly than in a pub cellar, and the choice towards the end of the festival will be limited, with all the more appealing or unusual beers having run out. On the other hand, it has to be recognised that a beer festival is run in the interest of the customers, not for the convenience of the staff, and if there’s a strong demand for something then it makes sense to respond to it. In effect, first night punters are being favoured at the expense of final session ones.

Last month, following years of grumbling, it was finally decided to adopt this approach at the Stockport Beer & Cider Festival. The results were entirely as expected, with a magnificent range of fresh, lively brews available at Thursday teatime, but by Saturday evening many of those remaining being distinctly tired, and some customers complaining of lack of choice – although that is always going to be an issue on the final session. The festival overall showed a substantial increase in attendance over the previous year, and virtually sold out, so the punters didn’t seem to be too concerned.

Realistically, it’s an approach you can’t follow if your beer festival lasts more than three days, and even that to my mind is stretching it a bit. Quality should never be sacrificed for maximising choice. If managing beer availability is seen as a major negative factor by customers, then the only way round the issue is to have fewer individual beers but buy two or more casks of those that are expected to be more popular. In a sense, this was what was done at Stockport with the “Bar Nouveau” (pictured) which highlighted beers released for public sale for the first time. There were around ten different beers, with three firkins being ordered of each. They all went on at the start, with the last cask being emptied late on Saturday evening. That way, the principle of free choice was maintained, but the customers knew they were always getting a pint from a cask that had been tapped less than a day before.